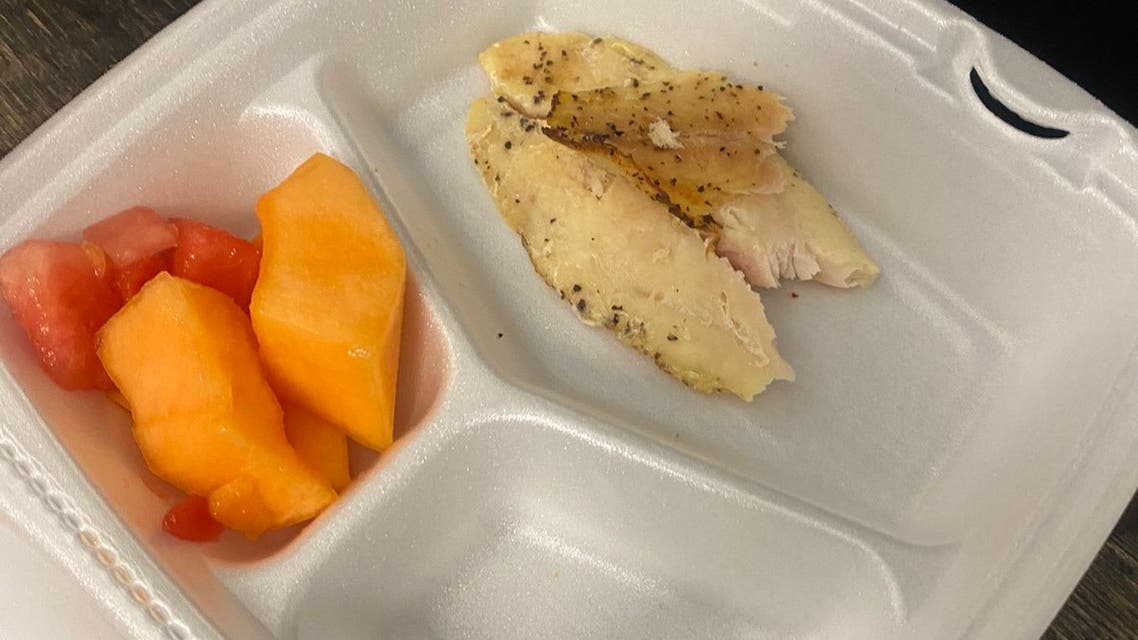 Hamed Ahmadi shares photo of a meal given to him and other Afghan refugees in the US. (Twitter)

LONDON: Hamed Ahmadi, an Afghan refugee in El Paso, Texas, posted a photo of his tiny meal on Twitter, saying that “refugee life might be safe” but that it is never easy and favourable.

Shortly after he began receiving backlash.

“It’s better than a lot of the meals I ate while spending 18 months in your country doing what you wouldn’t,” one person replied.

When Ahmadi posted the photo, which showed two small pieces of chicken and some fruit, he didn’t expect some of the negative comments he received.

“Not complaining but this is what I got last night for dinner and the next meal is 12 hours later,” he said in the tweet.

Not complaining but this is what I got last night for dinner and the next meal is 12 hours later. Refugee life might be safe but never easy & favorable. Fort bliss El Paso Texas. #AfghanRefugees #afghanistan pic.twitter.com/2X7eP8Uwa0

The 28-year-old told The Independent that the point of his tweet wasn’t to complain about conditions for refugees or to criticise, but to describe the situation of Afghan refugees.

A situation they never wanted to be in, he added.

“I had a pretty good job back in Kabul. I had a decent life. I had my family,” Ahmadi, a blogger and writer, said.

“I was forced to flee Afghanistan, he said, adding that he wanted to show what refugee life was like.

Another person replied to his tweet saying, “I hope you enjoyed your free plane ride, meals, and lodging paid from many of our paycheques (aka taxes).”

“So, we rescued you from Afghanistan and are giving you food that the taxpayers are paying for and you have the nerve to complain?” Lavern Spicer, a Florida Republican candidate, replied to Ahmadi’s tweet.

“Imagine what the Taliban would be serving up,” another person said.

Not all the replies were negative. Some people said they sympathised for refugees coming to America.

“My heart goes out to all the Afghanis who had to leave their country and family. It’s never easy leaving your motherland behind,” one woman replied.

Another person said that “there is no pleasure being a refugee,” adding that it’s a “hard and painful life.”

Ahmadi did not want to leave his country and family, he told The Independent. But his social media presence as a blogger working with foreign NGOs, would leave him at risk in Afghanistan after the Taliban took control of it.

“I had a lot of pictures doing jobs with Americans, with Germans, so I was kind of in danger – because you cannot trust the Taliban,” he told the British newspaper.

Last week, the UN High Commissioner for Refugees said that up to 500,000 Afghans could flee by year-end, reiterating a call for borders to remain open and for more countries to share “this humanitarian responsibility” with Iran and Pakistan which already host 2.2 million Afghans.