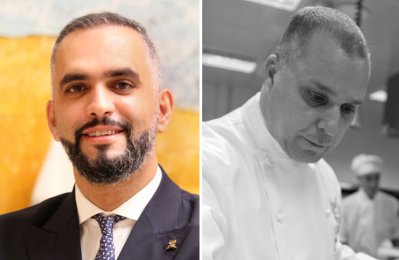 Ahmad Qasim and Thomas Pendarovski
The Palm Jumeirah’s newest luxury hotel, The St. Regis Dubai, The Palm, has announced two new additions to its team of experienced professionals, with the appointment of Ahmad Qasim as Director of Food & Beverage and Thomas Pendarovski as Executive Chef.
Qasim brings a track record with a demonstrated focus on high tier, luxury hotels. His experience spans over 12 years working in the hospitality industry, with exceptional skills across catering, F&B, hotel, and hospitality management. He joins The St Regis Dubai, The Palm following an impressive tenure as the Director of Food and Beverage at The Ritz-Carlton, Al Wadi Desert where he championed his extensive knowledge and passion for customer experience.
Qasim’s career has also seen him in top management level positions at various other properties such as The Ritz-Carlton, Dubai International Financial Center, and Jordan Valley Marriott Resort & Spa, among others.
His remarkable work approach earned him several accolades throughout his career, including Best Manager in 2010, Manager of the Year and Manager of the Quarter in 2011, and Leader of the Year in 2015.
Boasting over 16 years of experience, Pendarovski joins the property with extensive culinary expertise and a wealth of knowledge, both regional and global. He began his culinary journey at Marriott as the Executive Chef at Marriott Breadsall Priory UK, moving on to other properties including, Sofitel Jumeirah Beach Hotel, The St. Regis, Abu Dhabi, The Ritz Carlton Hotel, Jeddah and most recently, The Ritz Carlton Lagoon Bay, Doha.
Having previously held roles at some of the leading hotels across the globe, Pendarovski has spearheaded the successful openings of several world class restaurants, integrally contributing to making them stellar. Thomas has also worked with numerous Michelin Star Chefs, most notably was his time working with Chef Charlie Trotter.
His excellent work and ability to exceed expectations has seen him win several awards including Executive Chef of the Year in the 2013 Pro Chef Middle East Awards, as well as food competition. Pendarovski has also hosted The Stars Come Out, which features seven Michelin-starred Chefs collaborating for one night in Dubai. Thomas brings this professional vigor and unmatched culinary creativity to this new role, with competencies across leadership and management as well as hands-on capabilities in the kitchen.
Marwan Fadel, General Manager at The St. Regis Dubai, The Palm, said: “We are incredibly enthusiastic to welcome the newest additions to our cherished team. With both bringing a unique and exceptional skill base to the table, we anticipate their invaluable contribution to elevating the culinary experiences across all our F&B venues and delivering the utmost level of elegance for which The St Regis brand is recognised.” - TradeArabia News Service