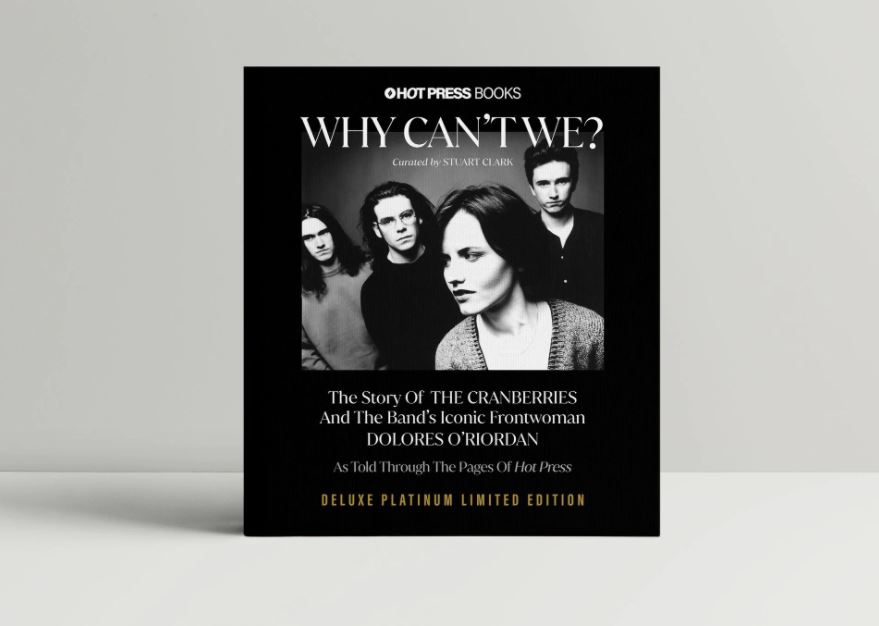 A handout photo shows a cover design of a book, "WHY CAN'T WE? – The Story Of The Cranberries and the band's iconic frontwoman Dolores O'Riordan", curated by deputy editor Stuart Clark, featuring interviews as well as previously unseen pictures. (Image credit: Hot Press)

Irish music magazine Hot Press looks at the rise to fame of Limerick rockers The Cranberries in a new book approved by the band and late frontwoman Dolores O'Riordan's estate.

"Why Can't We?" features interviews as well as previously unseen pictures. It is curated by deputy editor Stuart Clark, who has known the band since their early days.

The group, known for 1990's hits such as "Zombie" and "Linger", went on to become Ireland's best-selling rock band after U2, selling more than 40 million records.

O'Riordan drowned in a London hotel bath in January 2018 due to alcohol intoxication. The group disbanded in 2019.

Reuters spoke to guitarist Noel Hogan about the book, which can be pre-purchased in one of two editions, including a hardback copy signed by band members and O'Riordan's mother.

Below are excerpts of the conversation, edited for length and clarity:

Q: What is the book about?

Hogan: "We know Stuart from way back ... We live here in Limerick and he was a local DJ on a pirate radio station when we started out so Stuart used to interview us, then he moved to Hot Press and he always covered us. So there's literally, there is about 30 years worth of interviews, photos and so on.

"We liked the idea (Hot Press were) going to do everything but they wanted us to be part of it."

Q: Why do this book now?

Hogan: "Certainly, when they brought it to us, it wasn't something that was ever mentioned, maybe that's what kind of sparked this idea. The other side of it (is) the band obviously up until three years ago were a running entity. So I guess you do something like this when you're finished, more so.

"It probably didn't seem like right then would be the time, because things are moving along and you would be doing interviews and maybe, if Dolores hadn't passed away, I think the band was going and (it would be) something you could do way off down the road. So, maybe it's the combination of these things that kind of made them think, 'yep'."

Q: Did you have specific moments or thoughts when helping put the book together?

Hogan: "It's a bittersweet thing for us because you have amazing memories and you realise, God, we did so much stuff. And then it reminds you again that Dolores isn't here and that the band is finished and you don't have that anymore. But I guess we have learned to live within the time that the legacy of the band more now, that it's still appreciated. And, I mean, to have that after all this time, it's a pretty cool thing. It's something we never thought we would have."