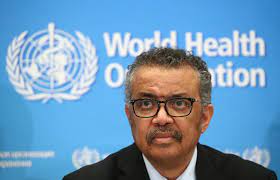 Director-General of the WHO Tedros Adhanom Ghebreyesus, attends a news conference on the coronavirus (COVID-2019) in Geneva, Switzerland February 24, 2020. REUTERS/Denis Balibouse

The World Health Organisation on Wednesday said low-income countries were ready to run effective Covid-19 vaccination campaigns and it was now down to manufacturers and rich countries to deliver the pledged doses to ease global health inequalities.

About 80% of the 5.5 billion vaccines doses that have been administered globally went to high and upper-middle-income countries, WHO Director-General Tedros Adhanom Ghebreyesus told a news briefing on Wednesday.

"Because manufacturers have prioritised or been legally obliged to fulfil bilateral deals with rich countries willing to pay top dollar, low-income countries have been deprived of the tools to protect their people," he said.

WHO has set a target to enable every country to vaccinate at least 40% of the population by the end of this year and Tedros said deliveries to poorer nations need to be boosted for this to be achieved.

More than 221 million people have been reported to be infected by the coronavirus globally and 4.76 million have died, according to a Reuters tally.

The global programme providing Covid-19 vaccines to poor countries is on course to fall nearly 30 per cent short of its previous goal of 2 billion shots this year, the international organisations running it said.

The head of the GAVI Vaccine Alliance, among the sponsors of the COVAX vaccine-sharing facility, blamed the cut on a range of factors including export restrictions on the Serum Institute of India (SII) as well as on manufacturing problems.

Tedros said ministers of the 20 richest nations had assured him they would do everything to achieve the 40% target this year.

"Now is time for true leadership, not empty promises," he added.