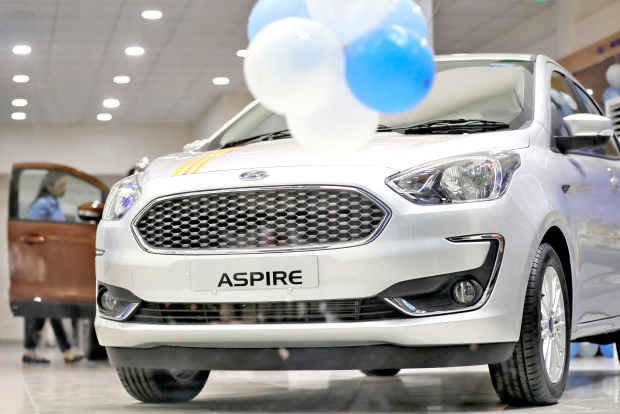 FILE IMAGE: A new Ford Aspire car is on display for sale inside a showroom in New Delhi, India, November 1, 2018. Reuters Photo

NEW DELHI: Ford Motor Co will stop making cars in India and take a hit of about $2 billion because it does not see a path to profitability in the country, becoming the latest automaker to leave the major growth market dominated by Asian rivals.

The US carmaker entered India 25 years ago but still has less than 2 per cent of the passenger vehicle market having struggled for years to win over Indian consumers and turn a profit.

Ford said yesterday that it had accumulated operating losses of more than $2bn in 10 years in India and demand for its new vehicles had been weak.

“Despite (our) efforts, we have not been able to find a sustainable path forward to long-term profitability,” Ford India head Anurag Mehrotra said in the statement.

Ford’s decision to cut its losses in India after leaving Brazil earlier this year underscores the pressures on global automakers to invest more in electric and automated vehicles, as well as connected vehicle technology.

Global automakers once fought to maintain a presence in every major market, and were willing to lose money to do so.

Now, companies such as Ford, General Motors, Renault SA and Stellantis NV are walking away from money-losing ventures and redirecting capital to electrification and investment in technology they need to survive.

Ford’s decision also comes as a setback for Indian Prime Minister Narendra Modi’s “Make in India” campaign. It follows other U.S. vehicle makers such as General Motors and Harley Davidson that have left India in recent years.

India was expected to become the world’s third-largest car market by 2020 after China and the United States with sales of some 5 million vehicles a year. Instead, sales have languished at about 3 million, still trailing Europe and Japan too.

India’s car market is dominated by low-cost, mainly small cars made by Japan’s Suzuki Motor Corp. Its Maruti Suzuki brand accounts for seven of the top 10 sellers with South Korea’s Hyundai Motor making the other three.

Ford has been escalating investment in electric vehicles (EVs) and advanced software. In May, it said it would boost spending on EVs by a third to $30 billion by 2030.

As part of the plan, Ford India will wind down operations at its factory in Sanand in the western state of Gujarat by the fourth quarter of 2021 and vehicle and engine manufacturing in its southern Indian plant in Chennai by 2022.