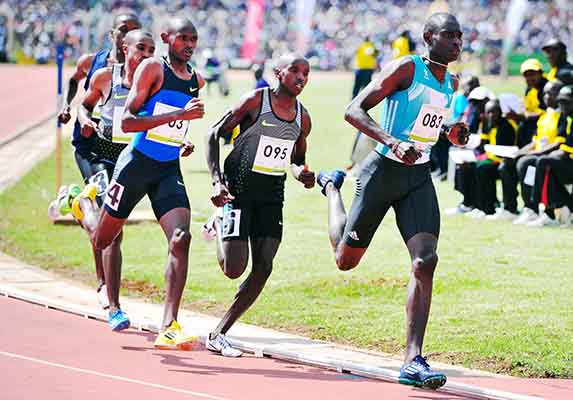 But Thomas Longosiwa, who won bronze in the 2012 London Olympics missed out on one of the three slots for selection to the Rio Games, which begin on August 5, after finishing fourth in the 5,000 metres - a race won by Commonwealth Games champion and last year’s world silver medallist Caleb Mwangangi Ndiku.

The first two qualified automatically, but Longosiwa also missed out on the selectors’ “merit” choice, which will go to Geoffrey Kamworor.

Longisiwa was the second major casualty of the punishing Kenyan trials, which were watched by an unusually large crowd at the Kipchoge Keino Stadium.

Earlier, Olympic silver medallist, Sally Kipyego was defeated in the women’s 10,000m and missed her ticket to Rio.

Ferguson Cheruiyot Rotich, who is leading on the Diamond League circuit and has emerged as Rudisha’s main challenger, won the second semi-final in 1:46.0, with London Olympic bronze medalist Timothy Kitum second in 1:46.5 and Patrick Kiprotich third in 1:46.9.

“It was important to qualify for the final. The race wasn’t easy and I had to push hard to win. But let’s see what happens tomorrow,” said Rudisha, 27, who has struggled for form and fitness since breaking the world record in winning Olympic gold in London, despite winning gold in Beijing last year.

But Rotich, who has beaten Rudisha twice this year, in Shanghai and Stockholm, looked in imperious form.

“After beating (Rudisha) twice this year, I am already feeling the pressure, and especially now that I am also leading in the Diamond League.

“People think I am the man of the moment, but I am able to handle that pressure by training hard and running good, like I have done today,” said the 26-year-old, who won the World Championships trials in Nairobi last year only to finish fourth in Beijing.

Kemboi, the 2012 London Olympics champion and four-time world champion, booked a place in the 3,000-metres steeplechase final by finishing third in the first semi-final, behind Alex Kibet (8:33.04) and Beijing Olympic gold-medalist Conseslus Kipruto (8:35.31).