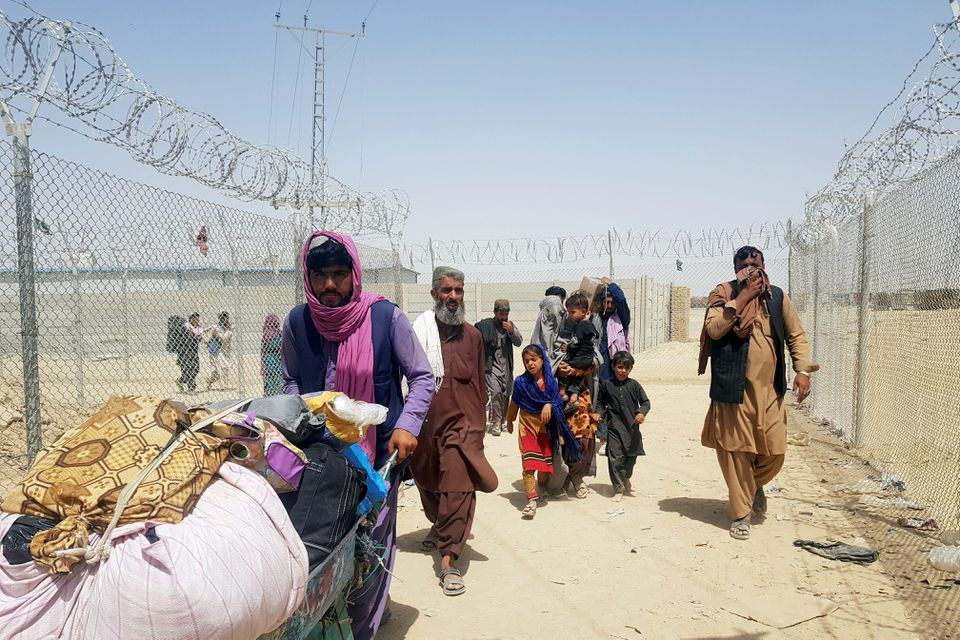 A family from Afghanistan walk next to fence to cross into Pakistan at the Friendship Gate crossing point, in the Pakistan-Afghanistan border town of Chaman, Pakistan September 6, 2021. Reuters Photo

GENEVA: Donors have pledged more than $1.1 billion to help Afghanistan, where poverty and hunger have spiralled since the Islamist Taliban took power, and foreign aid has dried up, raising the spectre of a mass exodus.

UN Secretary General Antonio Guterres, speaking halfway through a UN conference seeking $606 million to meet Afghanistan’s most pressing needs, said it was too early to say how much had been promised in response to the appeal.

After decades of war and suffering, Afghans are facing “perhaps their most perilous hour”, he said.

“The people of Afghanistan are facing the collapse of an entire country – all at once.”

He said food could run out by the end of this month, and the World Food Programme said 14m people were on the brink of starvation.

With billions of dollars of aid flows abruptly ending due to Western antipathy and distrust towards the Taliban, donors had a “moral obligation” to keep helping Afghans after a 20-year engagement, several speakers in Geneva said.

UN human rights chief Michelle Bachelet, also in Geneva, accused the Taliban of breaking recent promises by once more ordering women to stay at home rather than go to work, keeping teenage girls out of school, and persecuting former opponents.

Beijing last week promised $31 million worth of food and health supplies, and on Friday said it would send a first batch of 3 million coronavirus vaccines.

Pakistan sent food and medicine, and it called for Afghan assets frozen abroad to be released. Iran said it had dispatched an air cargo of aid.

Both China and Russia said the main burden of helping Afghanistan out of crisis should lie with Western countries.