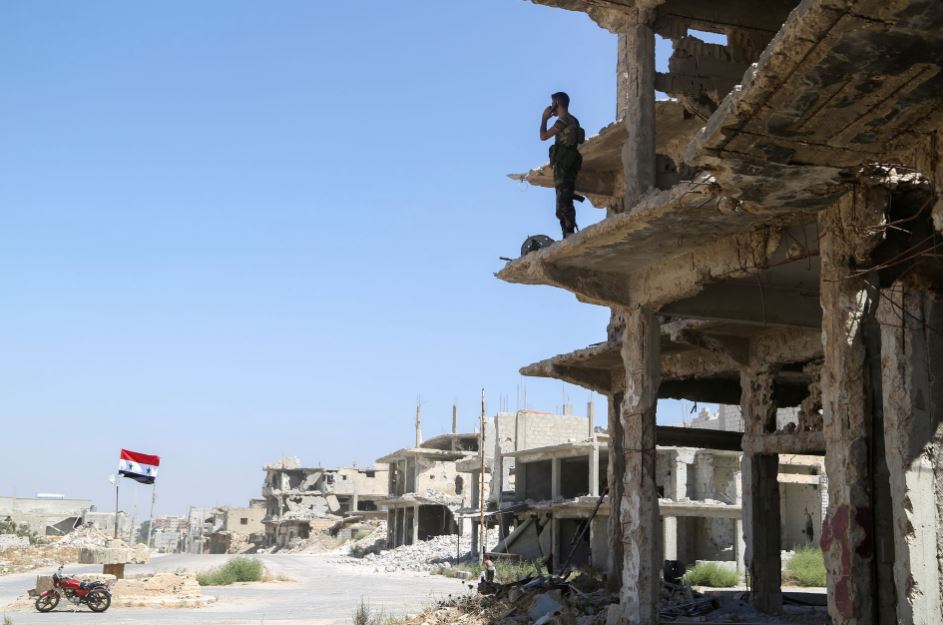 Syria's defence minister visited Jordan on Sunday to discuss stability on their mutual border, the first such meeting since the Syrian conflict erupted a decade ago when the two neighbours supported opposing factions, officials said.

The meeting follows a major army offensive to retake the last rebel bastion in southern Syria, and after reestablising control this month over Deraa, a city south of Damascus, in a Russian brokered deal that averted an all-out military assault led by Iranian-backed units of the army.

Jordanian army head Lieutenant General Yousef Hunaiti met Syrian Defence Minister and Chief of Staff Ali Ayyoub over the Deraa situation and to discuss issues such as the fight against terrorism and drug smuggling in the area, Jordan's army said.

"The talks are within the concern to intensify future coordination over all common issues," a statement from Jordan's army said.

The Syrian army's pro-Iranian elite Fourth Division had for over two months besieged the area where the first peaceful protests against authoritarian rule broke out in 2011 before security forces cracked down and unrest developed into civil war.

Jordan's King Abdullah, a staunch US ally, praised Russian President Vladimir Putin on a visit to Moscow in August where he said Russian troops who helped reverse the tide of Syria's conflict in Syrian President Bashar al Assad's favour, had succeeded in stabilising the country.

Jordan had for years supported mainstream Western-backed rebels who controlled southern Syria until a campaign by the Syrian army in 2018 aided by Russian air power and Iranian-backed militias retook the province.

Thousands of rebels, who once received arms and support funnelled through Jordan, handed over their weapons under surrender deals brokered by Moscow.

Moscow gave guarantees to Israel, Jordan and Washington at the time that it would prevent Iranian-backed militias from expanding their influence in the area that also borders Israel's Golan Heights.

The retaking of Deraa by government forces earlier this month has brought with it control of several towns and villages that until recently defied state authority.

Jordan and Israel are alarmed by an expanding Iranian presence through its penetration of Syrian army units and the proliferation of Tehran-funded militias who now hold sway in southern Syria, senior Western diplomats say.

Lebanon's Hezbollah has also consolidated its presence in Quneitra, a province that borders Deraa to the west along Israel's Golan Heights.

The military talks between Syria and Jordan, sources said, also addressed a major spike in drug smuggling in recent months which Jordanian officials say Lebanon's Iranian-backed Hezbollah is behind.

Hezbollah denies Western allegations it is behind a multi-billion dollar drug smuggling network that moves from Syria via Jordan to export to the Gulf.