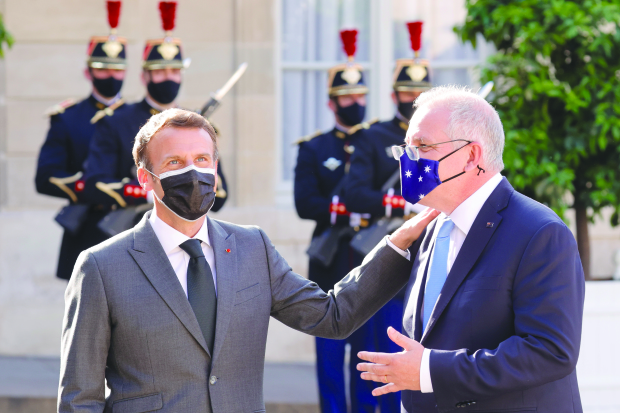 New Delhi: France is threatening to block talks on a planned free trade agreement between Europe and Australia after the Australian government ditched a huge deal to buy French submarines.

The French government has been seething ever since Australia abandoned its $65 billion deal last week with France in favour of a new military agreement with the US and the UK, reports CNN.

“Keeping one’s word is the condition of trust between democracies and between allies,” France’s European affairs secretary Clément Beaune told Politico. His remarks were confirmed yesterday by a spokesperson. “So it is unthinkable to move forward on trade negotiations as if nothing had happened with a country in which we no longer trust,” Beaune added.

As part of the security pact, known as AUKUS, Australia will be supplied with the technology to construct a fleet of nuclear-powered submarines, considered to be superior to the conventionally powered vessels Canberra had previously agreed to buy from Paris. In response to the move, France recalled its ambassadors to the US and Australia on Friday.

Negotiations on a free trade agreement between the European Union and Australia were launched in June 2018, and so far 11 rounds of talks have been held, covering areas such as removing barriers to exports and intellectual property rights. The next round is scheduled to take place later this year.

While the European Commission has the power to conduct trade talks on behalf of the 27-country bloc, it is unlikely to go ahead with the deal if the French are opposed to it.

In an exclusive interview with CNN’s Christiane Amanpour, European Commission President Ursula von der Leyen said yesterday that “a lot of questions” must be answered about the collapse of the submarine deal.

“One of our member states has been treated in a way that is not acceptable, so we want to know what happened and why,” von der Leyen said, adding that the situation must be clarified “before you keep on going with business as usual.”

The Commission’s chief spokesperson Eric Mamer said earlier that the next round of EU-Australia talks had been scheduled for October and that the Commission was currently analysing “the impact that the AUKUS announcement would have on this schedule.”

The European Union was Australia’s third largest trading partner in 2020, according to the European Commission. Goods trade between the two amounted to $42bn that year while trade in services was worth $30bn in 2019.

The threat to an EU trade deal comes at a time when Australia is looking to develop new export markets after relations with China, its largest trading partner, soured recently.

Australian coal, wine, barley and beef have all already been affected by trade tensions with China, and experts say that AUKUS has antagonised Beijing even further.