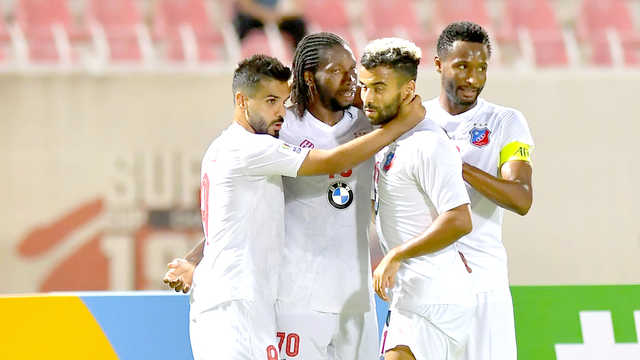 Kuwait will meet Muharraq – who defeated 2019 champions Al Ahed of Lebanon in their West Zone semi-final on Monday – in the final on October 20.

It took just 12 minutes to get the first goal of the game as the hosts pressed from kick off to take the lead. Faisal Al Harbi got played in by El Mehdi Berrahma from the left flank, before angling himself towards goal and firing past the keeper.

Dieumerci Mbokani could have got Kuwait’s second of the night just five minutes later when he received a high ball into the area, and under pressure from two defenders he managed to control the ball before taking a shot that went just over the crossbar.

The DR Congo striker did eventually double the home side’s lead 25 minutes into the game with an impressive close-range header, but most of the credit for the goal should go to Abdulmohsen Al Turkomani on the right flank, who dispossessed an Al Salt player before sending a pinpoint cross in for Mbokani to make it 2-0.

Al Salt almost cut the deficit in half late in the first period of play when a free-kick routine saw new signing Ahmed Sariweh play a low ball to the awaiting Bilel Khefifi at the edge of the area, with the latter lashing a shot that needed Hameed Youssuf’s immediate reaction to get to it.

The Jordan Premier League side once again came within inches of scoring their first goal when Adham Al Quraishi sent a ball from the right wing into the six-yard-box, which was met by a header from substitute Mohamad Al Kloub that slipped just wide of the far post.

Al Harbi, scorer of the first goal, almost added a third when from the right flank, he stopped and appeared to be crossing the ball, but his shot flew far too close to Mutaz Yasin’s goal and he needed to leap to tip it above the bar.