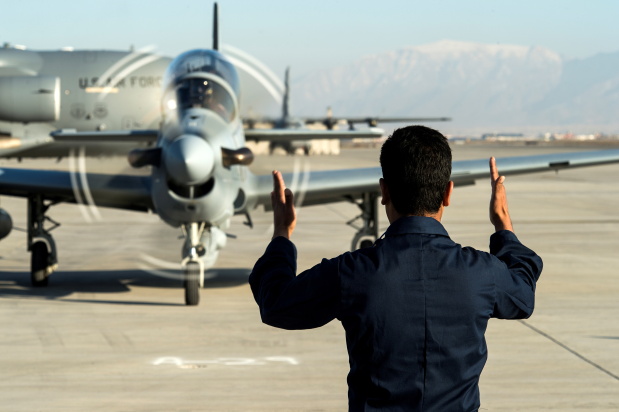 FILE IMAGE: A member of the Afghan air force marshals in an A-29 Super Tucano at Hamid Karzai International Airport near Kabul, Afghanistan, January 15, 2016. Tech. Sgt. Nathan Lipscomb/Handout via Reuters

WASHINGTON: A US-trained Afghan pilot was talking to Reuters on a smuggled cellphone from Tajikistan, where he is being held, when something strange happened - his voice started looping, repeating everything he had just said, word for word.

His fiancee, an American nurse in Florida, was on the line too and started to panic. She shouted his name, but his words kept cycling back.

"I was freaked out," she said, speaking on condition of anonymity to protect him. "The worst things came to my mind."

Whatever the reason for the telephone glitch, which only happened once, it added to a deep sense of anxiety for the couple. It also came amid growing feelings of impatience and uncertainty among the Afghan pilots and personnel who have been held by the government in Tajikistan since fleeing there on Aug. 15.

There are 143 Afghans detained at a sanatorium in a mountainous, rural area outside of the Tajik capital, Dushanbe, waiting and hoping for over a month for transfer by the United States.

After flying there with 16 aircraft as their military's ground forces crumbled before the advancing Taliban, the Afghans say they had their phones taken away. They were initially housed in a university dormitory before being moved on Sept. 1.

Contact with family is extremely limited. Although they appear to be held in humane conditions, they are on edge, uncertain about the future.

"We don't know about our destination. ... We're all worried about that," the pilot said.

The pilots want to join the other Afghan military personnel being processed for US visas in places like Qatar, the United Arab Emirates and Germany.

"Whenever we ask the government of Tajikistan, they just answer: 'Please wait,'" said a second pilot, speaking separately on condition of anonymity.

Among the military personnel at the facility are two Afghan women, including a pilot who is eight months pregnant, the second pilot told Reuters.

Such a pregnancy would be an important reason to move them quickly, said David Hicks, a retired US brigadier general who is helping lead a charity called Operation Sacred Promise working to evacuate and resettle Afghans.

There are also 13 Afghan personnel in Dushanbe, enjoying much more relaxed conditions. Several of those pilots told Reuters they flew separately into the country on Aug. 15 and are staying in a government building. Speaking in a video call, they said they have not had contact with the Afghans at the sanatorium.

The pilots could not explain why the two groups were being kept apart.

The US State Department declined to comment on the pilots in Tajikistan. Tajikistan's Foreign Ministry did not respond to a request for comment.

The US-trained Afghan pilots in Tajikistan are the last major group of Afghan air force personnel abroad still in limbo after flying dozens of advanced aircraft across the Afghan border to that country and Uzbekistan in the final moments of the war.

Earlier in September, a US-brokered deal allowed a larger group of Afghan pilots and other military personnel to be flown out pilots there had feared they could be sent back by the Uzbeks to Taliban-ruled Afghanistan and killed for inflicting so many Taliban casualties during the war.

Afghanistan's new rulers have said they will invite former military personnel to join the country's revamped security forces and that they will come to no harm.

That offer rings hollow to Afghan pilots who spoke with Reuters. Even before the Taliban takeover, the US-trained, English-speaking pilots had become their prime targets. Taliban fighters tracked them down and assassinated them off-base.

The pilots did not express concern the Tajiks will send this group back to the Taliban. But after more than a month, pilots and their supporters complain about a lack of urgency by authorities to move the group along.

Reuters has learned that US officials have started collecting biometric information to confirm the identities of members of the group, in a sign that help could soon be on the way. A similar effort in Uzbekistan preceded those pilots' transfer from there.

People close to the pilots said the United States had collected biometric data on about two-thirds of the group so far.

Paul Stronski, a senior fellow at the Carnegie Endowment for International Peace, thinks Tajikistan's president, Emomali Rahmon, may be proud of his role receiving the pilots as the Taliban swept to power.

Tajikistan, which shares a porous, 835-mile (1,345-km) border with Afghanistan, has broken from its more conciliatory neighbours and been outspoken about its concerns over the new Taliban government in Afghanistan.

"The Tajik government is probably playing this to try to get some benefit," Stronski said. "There's no domestic urgency, and it probably suits Rahmon to sort of say: 'We're housing these people.'"

About a quarter of Afghanistan's population are believed to be ethnic Tajiks, although no recent census data exists. But they and other ethnic minorities are not represented in the Taliban's interim government, a point Rahmon has made publicly.

"Foisting any political system on Kabul without regard for the voice of the Afghan people, which consists of diverse ethnicities, may lead to seriously negative consequences," Rahmon was quoted by Russia's TASS news agency as saying last week.

Tajikistan says it has given asylum to more than 3,000 refugee families from Afghanistan, a total of 15,000 people, in the past 15 years.

A Tajik government source familiar with the situation blamed delays by the United States and Canada to issue visas.

NO PHONES, FOR SAFETY'S SAKE

When the Tajik government confiscated the Afghans' phones, it told the pilots it was for their safety, explaining the Taliban could trace their signal when they called home.

"You are not allowed to use your phone for the security of your family," a Tajik official said, recounted the second pilot.

The Tajik government source also said the Afghans' phones were taken from them so that their exact location could not be tracked.

But being largely cut off from communications has taken a psychological toll. The pilots are fearful their families in Afghanistan could suffer Taliban reprisals and, with the war lost, they have no income to support them.

The second pilot recounts seeing people pacing around outside the sanatorium in the middle of the night.

The American nurse, who is a dual US-Afghan national, and her fiance have only spoken infrequently. After the technical glitch, where the pilot's voice started looping, they took a break from calls for a while.

The nurse sounded exhausted and frustrated by the lack of progress after calling offices of US lawmakers and government officials.

"I have reached out to literally anyone and everyone I could," she said. "No one has been able to help."