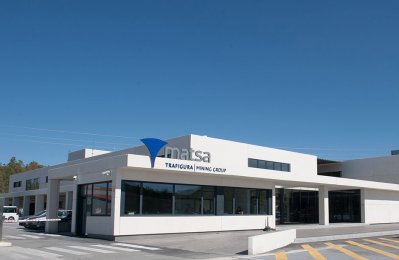 Major Australian group Sandfire has reached an agreement with Abu Dhabi-based Mubadala Investment Company and global commodities trader Trafigura to acquire one its JV subsidiaries, Minas de Aguas Teñidas (Matsa) for €1.58 billion ($1.85 billion).
The deal is expected to conclude in the first quarter of 2022.
A leading Spanish mining company, Matsa is the only company among the top 30 in turnover in the province of Huelva located in the Sierra. Its activity has an annual economic impact of about €190 million in the province, including payments to suppliers and contractors, salaries, fees and taxes.
It is the owner of the exploitation rights of the Aguas Teñidas, Magdalena and Sotiel underground mines, all of them in the province of Huelva.
Currently, it generates about 4,000 jobs, between direct, indirect and induced. Its workforce is made up of about 750 people, with 90% permanent employment and an average age of around 42 years for men and 36.5 for women.
Matsa CEO Audra Walsh said: "This is a historic moment for our company, which we welcome with joy and enthusiasm. This operation guarantees the continuity of our commitment to excellence and efficiency in all our processes, since we share with Sandfire the commitment to the highest standards of safety, responsibility and sustainability."
Sandfire, he stated, was a dynamic, innovative company with a solid track record in underground base metal mining, and which is why it offers Matsa stability and certainty thanks to its knowledge and experience in the sector.
In turn, Matsa represents a fundamental investment for the Australian company as it has global projects in the main areas of the world: Asia-Pacific, Europe, America, the Middle East and Africa and America.
Located north of the Iberian Pyrite Belt, Matsa is one of the only two mining operations in the Huelva Province and one of the three copper mines currently operating in Spain. The Magdalena mine commenced production in late 2015.
Mubadala, which has over $243 billion of assets under management, acquired its stake in Trafigura’s flagship Matsa as part of a joint venture to invest in the base metals mining sector.
Besides Matsa, Mubadala has investments in Canadian miner Equinox Gold and Sociedad Minera de Santander in Colombia.