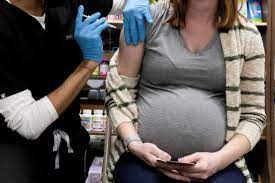 Pregnant women who get an mRNA vaccine against COVID-19 pass high levels of protective antibodies onto their babies, new research shows.

Doctors analysed umbilical cord blood from 36 newborns whose mothers had received at least one dose of an mRNA vaccine from Pfizer/BioNTech or Moderna.

All 36 babies had high levels of antibodies that target the spike protein on the surface of the virus - and all of the antibodies could be traced to the mothers’ vaccinations.

The findings, reported on Wednesday in the American Journal of Obstetrics and Gynecology - Maternal-Fetal Medicine, indicate that “the antibodies that the mother is building to the vaccine are crossing the placenta and that’s likely to confer benefits for the infant after it’s born,” said co-author Dr. Ashley Roman of NYU Langone Health in New York City.

It is not clear whether the timing of vaccination during pregnancy is related to antibody levels in the baby.

And, “we don’t know how long those antibodies stick around in the baby,” Roman said. “But the presence of these antibodies in the cord blood, which is the fetus’ blood, indicates that the baby also has potential to derive benefit from maternal vaccination.”