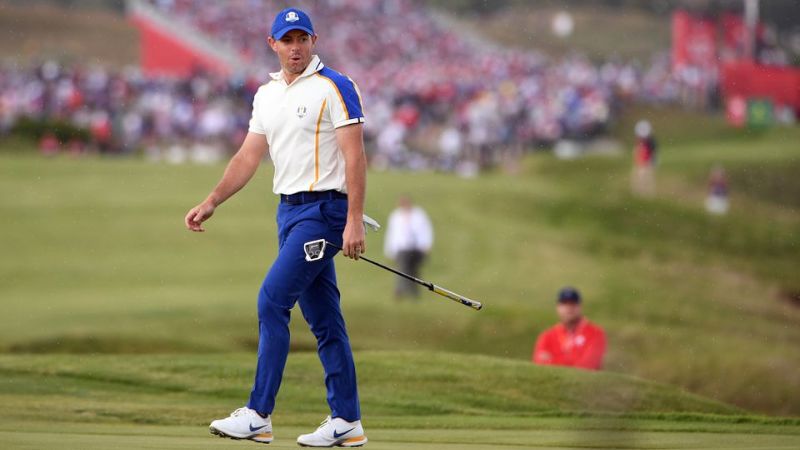 McIlroy on the field (Reuters Photos)

Rory McIlroy let out a roar after draining a birdie putt to go 3-up on Xander Schauffle through 14 holes in the first singles match at the Ryder Cup on Sunday.

Two holes later, he secured the first point of the day for Team Europe.

It was a rare burst of emotion this week for the Northern Irishman, who appeared stoic - if not exhausted - in going 0-3 during the group rounds. He played poorly enough that captain Padraig Harrington sat McIlroy during the first session on Saturday, the first one the four-time major champion has missed during his Ryder Cup career.

After finishing off the Olympic gold medalist on Sunday, however, a tearful McIlroy called the Ryder Cup "the best event in golf" while saying he only wished he had contributed more to his team's cause.

"Incredibly proud to be a part of this team, to be a teammate of all these guys," he said. "We've had a great time.

"I've been extremely disappointed that I haven't contributed for more the team. I'm glad I got a point on the board today for them."

McIlroy's view of the event has come full circle since infamously saying in 2009 that "the Ryder Cup is not a huge goal of mine."

He now regularly speaks about the potential of serving as captain in the future, and McIlroy's passion for the event was clear in his post-round interview Sunday.

"It's been a tough week," he acknowledged. "And the more and more I play in this event, I realize that it's the best event in golf, bar none. I love being a part of it. I can't wait to be a part of many more.

"I don't think there's any greater privilege to be a part of one of these teams, European or American. It's an absolute privilege."

McIlroy said he was on a mission to score a point for his team Sunday, even though he knew a record comeback by the Europeans was highly unlikely. But he wanted the point for his teammates - and to serve as inspiration to boys and girls watching the event.

"I have not - never really cried or got emotional over what I've done as an individual," he said. "I've said naive and stupid things in the past but this is by far the biggest tournament that we have in golf.

"You look at the crowds. You look at what it means, it's the best. I can't wait to be a part of many, many more Ryder Cups and be teammates with some of these great guys and try to win many more."