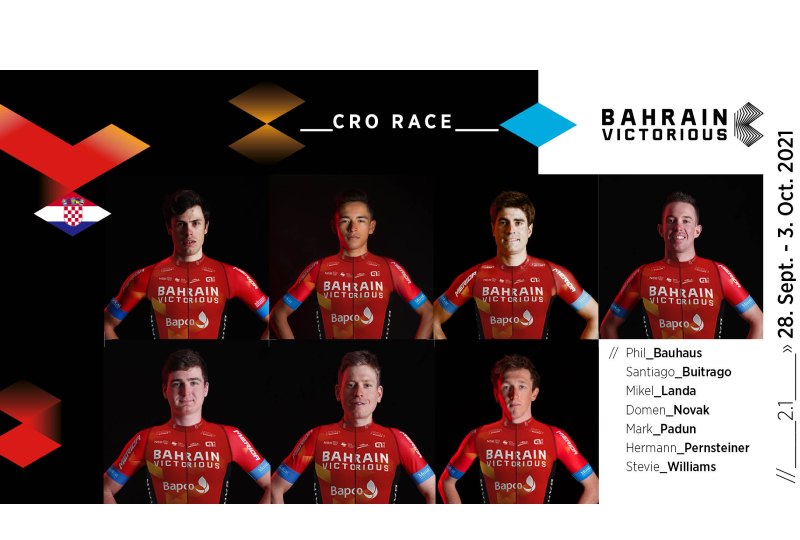 Bahrain Victorious is ready for the CRO Race which starts today from Osijek, passes through Ludbreg, and ends in Varaždin.

The opening and longest stage of the race is 237 kilometres long, running through the plains, and it will be one where wind conditions could split the race instead of the expected bunch sprint in the central square of Varaždin.

The town of Slunj opens the second stage, and then the cyclists descend to Lika-Senj County and finish in Otočac. The stage will include the pearl of the Plitvice Lakes National Parks, and for the bonus seconds, cyclists will fight in Perušić and the first pass through Otočac.

After that, the race will move to the coast, more precisely to Primosten, from where the third stage, 167 kilometres long all the way to Makarska.

The fourth stage starts in Zadar, going along the Adriatic Highway, leading cyclists to the bonus goal in Senj and the final in Crikvenica.

The fifth mountainous stage covers the Istria and Primorje-Gorski Kotar counties, is Rabac and Labin, passing through Pazin, Kastav, Viškovo, and Rijeka and ending in Opatija. The final stage ends in the capital, Zagreb, where the race winner will be awarded the red and white checkered jersey.

Franco Pellizotti commented on the team’s objectives: “The performance goal of Team Bahrain Victorious is to finish the race with the GC leader Mikel Landa on the podium. From six stages, four are sprint stages where the team will attack with Phil Bauhaus, our road captain, and the leading sprinter.”