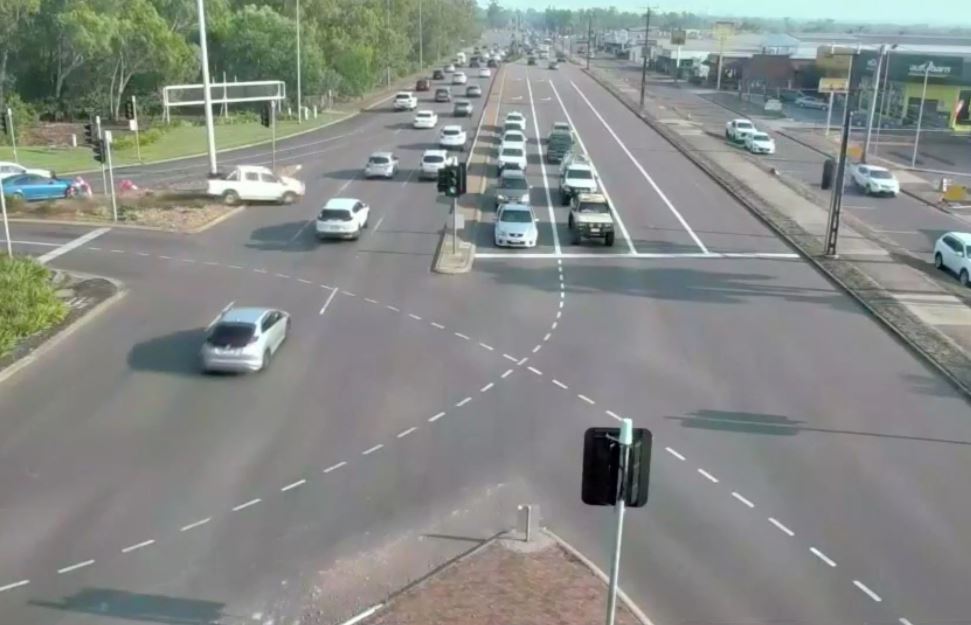 A white Toyota Hilux (L, near post) is seen speeding down horizontally across lanes of traffic in Darwin, Australia, September 23, 2021, in this still image taken from video obtained from social media. According to police, the passengers in the car were conveyed to a hospital with non-life -threatening injuries. Video taken September 23, 2021. (Image credit: Northern Territory Police, Fire And Emergency Services)

Australian police captured dramatic footage of a white truck speeding unscathed across seven lanes of traffic in a once-in-a-lifetime incident.

Though a mere five seconds, the riveting video shows a Toyota Hilux truck in Australia's Northern Territories drive over a sandy median, narrowly avoid a collision with another car in three lanes of moving vehicles, thread through two lanes of stationary cars, bounce across two empty lanes and then hurtle toward a line of storefronts.

The driver of the utility vehicle, or ute as the vehicle is commonly known in Australia, was heading towards the city of Darwin when she allegedly lost control, failed to negotiate a turn, and crashed into a business, according to the police in a post on social media.

The two passengers, a female driver and a young child, were conveyed to Royal Darwin Hospital with non-life-threatening injuries, the post said.

"It is incredibly lucky no one else was injured in this incident," said Superintendent Daniel Shean of the Northern Territory Police, reminding people to always drive with due care and attention.

Social media users said they found the video mesmerising, with many pointing out how lucky the driver and those in the other cars were.