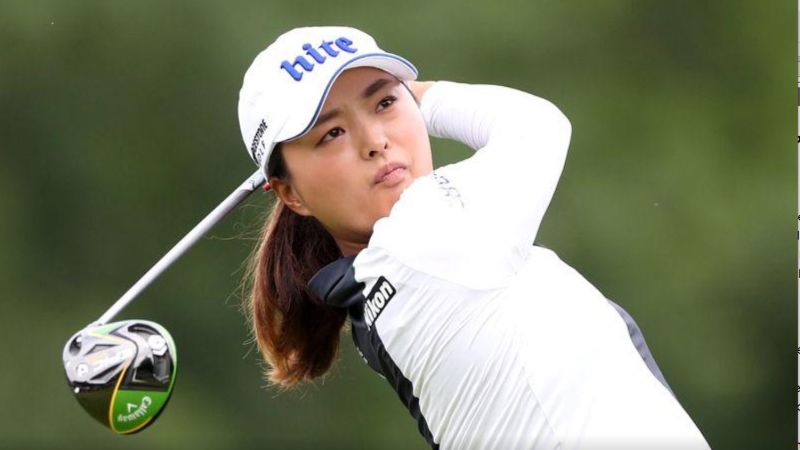 South Korea's Jin Young Ko in action during the final round. (Reuters Photo)

South Koreans Jin Young Ko and Inbee Park, the second- and third-ranked players in the world, forged a tie atop the leaderboard Saturday after two rounds of the ShopRite LPGA Classic in Galloway, N.J.

Each golfer exceeded their Friday round with matching 6-under 65s to soar to 11 under, two strokes ahead of Patty Tavatanakit. Ko recorded five birdies on the first eight holes and six for the day.

"Well, yeah, I would say like I was into the -- like my game was like perfectly on the front nine, but I was thinking, OK, I want to get more birdies on back nine," Ko said.

She expects to maintain her aggressiveness on the final day.

"This course is a little shorter so we can get a lot of birdies," she said. "So, yeah. I will do aggressive play tomorrow."

Meanwhile, Park had a bogey on 8, but rallied with seven birdies overall -- including 18 -- to earn a share of the lead going into the final round Sunday.

Other golfers to match Ko and Park with a second-round 65 included second-year pro Tavatanakit, who sits in third, and Australia's Su Oh, tied for sixth.

"I played quite solid I guess," Oh said. "Eight birdies and two bogeys. I putted quite well compared to yesterday. Like the greens, the first six holes I just couldn't get the bounces on the greens. It's so firm out there.

"But you don't -- sometimes you just don't have anywhere to land so you just have to like make an up and down. But this morning a little bit softer, a little bit cooler, which is kind of nice. And the greens are fresh, and so took advantage of that."

Two golfers are tied for fourth at 8-under. Brittany Lincicome shot a 67 with an eagle on No. 9. And Denmark's Nanna Koerstz Madsen also notched an eagle, on No. 3, to give her a second straight solid round fresh off her opening round 66.

Oh is tied with three other players in sixth: France's Perrine Delacour, So Yeon Ryu of South Korea and England's Jodi Ewart Shadoff.

Ryu and Shadoff had led the field after the opening round, and each shot a 1-under 70 Saturday. Delacour carded a 3-under 68 with a birdie on 18.

The tournament is a 54-hole event with no cut. Play concludes Sunday.