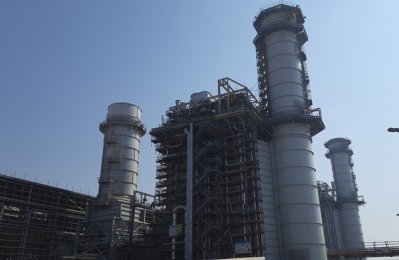 The Hamriyah Independent Power Plant
Sharjah Hamriyah Independent Power Company (Shipco) and GE marked the successful ‘first fire’ of the second H-class gas turbine at the 1.8 gigawatts (GW) Hamriyah Independent Power Plant (IPP) in Sharjah, UAE.
First fire is a critical test and an important milestone, where a turbine is switched on and operated on fuel at the site, following several months of installation and commissioning works.
The Hamriyah IPP is the first independent combined cycle power plant in Sharjah. GE Energy Financial Services and Japan’s Sumitomo Corporation signed an approximately 25-year power purchase agreement (PPA) with Sharjah Electricity, Water, and Gas Authority (Sewa) to develop, build, and operate the plant. Following financial close in 2019, the co-developers, along with Shikoku Electric Power Company and Sharjah Asset Management, the investment arm of the Sharjah Government, formed a joint venture company - Shipco - to build, own, and operate the project.
GE Gas Power is providing turnkey engineering, procurement, and construction (EPC) services and supplying three 9HA.01 gas turbines, six generators, and three heat recovery steam generators (HRSGs) for the facility. It will also provide parts, repairs, and maintenance services for power generation assets at the site for about 25 years.
Saeed Sultan Al Suwaidi, Chairman of Sewa, said: “The successful first fire of the second gas turbine at the Hamriyah IPP is a significant achievement and I commend the combined efforts of Sewa, Shipco, and GE’s teams as we collectively work towards the completion of this critical project. The facility is a key component of Sewa’s 2030 Roadmap and is anticipated to help generate up to 40% of Sharjah’s electricity supply when complete.”
“Setting up the Hamriyah IPP is an incredibly complex undertaking that has already involved more than 7 million person hours by up to 1,500 people from over 20 countries. I am delighted to share that almost all the engineering works and up to 80 percent of the commissioning works for the power plant have now been executed,” said Omar Almulla, Chairman of Shipco.
“Once complete, this is expected to be the most efficient power plant in the Middle East’s utilities sector, and the high efficiency level translates into significant environmental benefits.”
GE’s H-class technology has won two world records for combined cycle efficiency and in 2021, projects powered by the turbines won the 2021 Plant of the Year, Plant of the World, and Reinvention Award.
Using three GE 9HA.01 turbines will help Sewa reduce carbon dioxide emissions by up to four million tonnes per year, compared to current levels – equivalent to taking up to one million cars off the roads of the UAE.
“GE is honoured to bring its record-setting H-class gas turbines to power the Hamriyah IPP and provide reliable, more sustainable electricity for the people of Sharjah. The technology has already been adopted by more than 50 customers from 20 countries, generated over 26 GW of power, and clocked in over 1 million commercial operating hours,” explained Joseph Anis, President & CEO of GE Gas Power Europe, Middle East, and Africa.
“GE’s H-Class gas turbine portfolio also has the capability to burn up to 50% by volume of hydrogen when blended with natural gas. Furthermore, GE’s H-class combined cycle plants can be configured with a post-combustion capture system to reduce carbon dioxide emissions by up to 90%. These capabilities enable the Hamriyah IPP and Sharjah to potentially transition to an even cleaner energy future in the years ahead.”
GE has supported the development of the energy sector in the Gulf Cooperation Council (GCC) for over 80 years. Today, GE-built power generation technologies are installed in up to 350 sites across the region, generating up to half of the GCC’s power.-- TradeArabia News Service