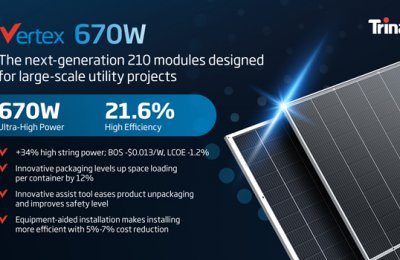 670W Vertex module features
Trina Solar Co, a leading global PV and smart energy total solution provider, has announced the availability of the 670W Vertex module in the Middle East and Africa.
The series obtained the IEC certification from the TÜV Rheinland after passing complete reliability test and realised the mass production. This marks an even higher milestone in the PV 6.0 era and demonstrates that 600W+ is unstoppable in the future.
According to Dr Zhang Yingbin, Trina Solar's head of product strategy and marketing department, the 670W Vertex series inherits the non-destructive cutting, high-density interconnection and other high-precision technologies of the 210mm modules; with the ultra-high module power, the single string power gets 34% higher than that of other 500W+ modules in the industry.
In addition, 670W Vertex modules maximise the container space utilisation in transportation, as a result of which the 12% up in the loading power and 5 - 7% down in the installation cost, creating more room for reduction of the LCOE and BOS cost.
Antonio Jimenez, Managing Director and Vice President, Middle East & Africa, Trina Solar commented: “The new 670W Vertex series is a milestone achievement in the PV modules industry, and we are truly proud to be leading the way with our cutting-edge technology that continues to revolutionise the solar energy sector. We are confident that the new 670W Vertex series modules will attract plenty of attention across the MEA region as it does globally, and we are looking forward to fulfilling our customers’ requests for these ultra-high-power modules.”
As a type of 210mm module, Trina Solar's 670W Vertex bears non-destructive cutting, high-density interconnection, multi-busbar (MBB) and other forward-looking innovative technologies, with low voltage, high string power and other core features, presenting efficient and reliable product performance.
The MBB and high-density interconnection improve the module efficiency to up to 21.6%, while the non-destructive cutting pioneered by Trina Solar significantly reduces the risks of cell micro crack and power loss.
Increasing in power of the single string is the core factor to reduce the BOS cost. At the launch of the 670W Vertex, Dr Yingbin explained that in large-scale power plants (-20℃), the 670W Vertex has 28 modules on each string. Compared to other 500W+ high-power modules in the industry, the 670W Vertex module achieves a total power increase of up to 18,760W per string, 34% higher than that of the 500W+ modules.
670W Vertex module is suitable for large-scale power plants, especially the low-cost power plants which are very sensitive to investment costs, because the 670W modules can reduce the non-silicon cost of silicon wafers and cells for the upstream supply chain, and reduce the cost of trackers, pile foundations, cables and labor for the downstream.
Trina Solar once again introduced the reliability the 670W product performed in transportation and installation.
For 600W+ series products, Trina Solar innovated the packaging method to vertical placement, so that the width of the modules is no longer limited by the height of the container. Such packaging makes the best use of the container's internal capacity. Compared with the traditional ways, the loading power increases by 12%, which introduces a 12% cost reduction in transportation.
For the stage of unpacking and installation, Trina Solar provides simple and easy-to-use auxiliary tools with standard configuration, which can be used as the support of the box body to ensure the safety in the entire unpacking process.
The load capacity of Trina Solar's 670W modules is also tested. On one hand, the optimised frame design and material selection prevents the deformation even when the module area increases, and reduces the risk of micro crack. On the other hand, the non-destructive cutting ensures that each cutting surface of the cell is smooth and crack-free.
At the beginning of this year, Huawei, Si-Neng, and Sungrow launched inverters compatible with the 600W+modules, and TBEA, GOODWE, Ginlong, Kstar, SMA and some other inverter manufacturers also announced their products compatible with high-power 210mm modules.
Almost at the same time, eight world-leading PV tracker manufacturers - Arctech Solar, Array Technologies, GameChange Solar, IDEEMATEC, Nextracker, PVH, Soltec, TrinaTracker - announced trackers of full compatibility with 210mm ultra-high power modules.
In early March, glass manufacturers such as Xinyi, Flat, CNBM, Kibing and China Southern Glass also brought the news that they have broken through the bottleneck of width in PV glass raw materials production and started to fully adapt to the large-size 210 modules.
The 210mm modules, integrating high efficiency, high reliability, high power generation and low cost have been increasingly favoured by the market, with tenders for large-size modules accounting for more than 78%. By the end of 2021, 210 modules production capacity is expected to achieve 120 GW in the entire industry. At Trina Solar, 210 modules will account for 70% to 80% of its overall shipments this year. -- TradeArabia News Service