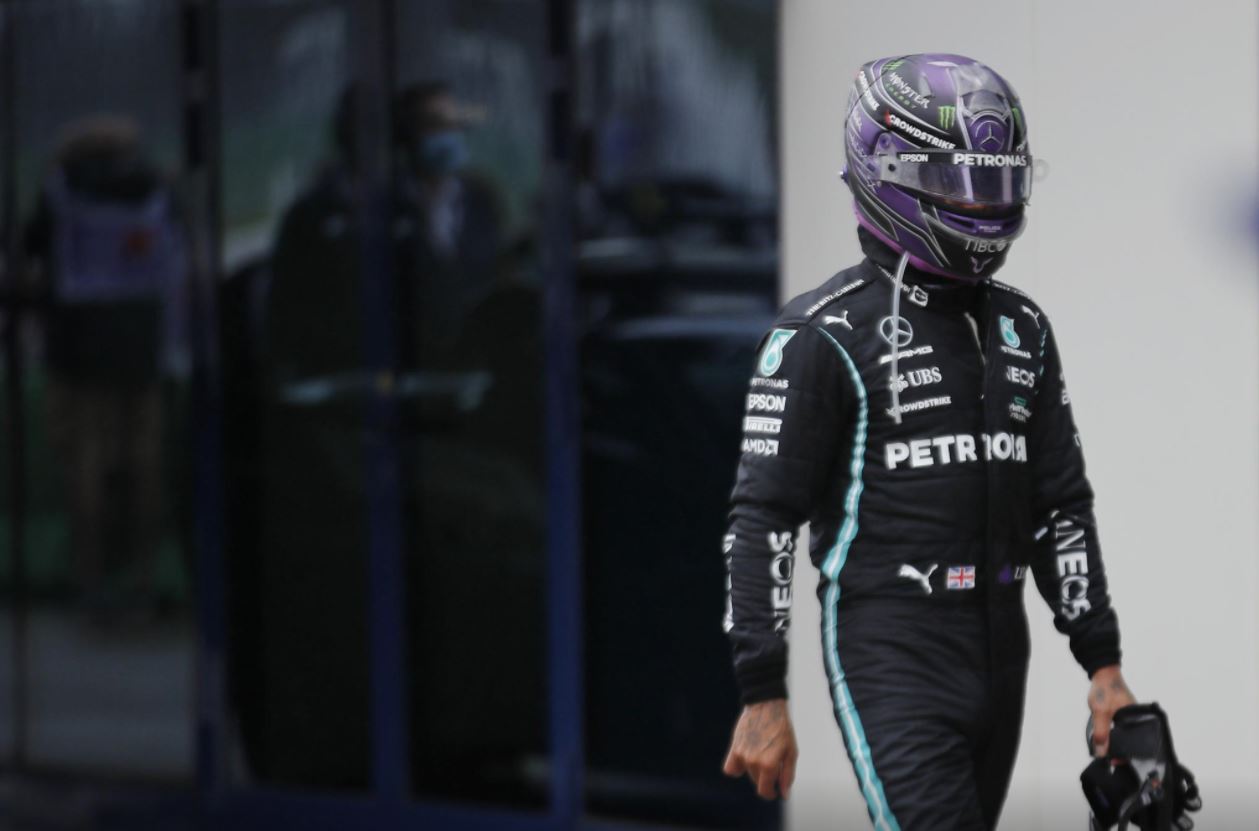 Mercedes' Lewis Hamilton after finishing the race in fifth place REUTERS/Umit Bektas
LONDON: Lewis Hamilton could have completed last Sunday’s Turkish Grand Prix without stopping but he would have finished lower than the fifth place he ended up with, his Mercedes team said in a debrief yesterday.
Seven-times Formula One world champion Hamilton had wanted to go the distance on intermediate tyres after starting 11th on a wet afternoon due to engine penalties but eventually pitted from third place.
The race cost the Briton the overall championship lead, with Red Bull’s Max Verstappen moving six points clear after finishing runner-up to Hamilton’s team mate Valtteri Bottas.
Hamilton had angrily questioned Mercedes’ tactics at the time but the team’s chief technical officer James Allison said the outcome would have been worse had he not followed instructions.
“In all likelihood, we would have got to the end of the race on one set of tyres, able to circulate without difficulty,” said Allison.
“The question is, how quick would we have been? And the evidence there is pretty clear: we would have been very slow.
“Lewis’s lap times were starting to get worse lap by lap by lap and while he would have made it to the end of the race, the pace would have been quite dismal by the time he got there.”
Prediction
Allison said the optimum in hindsight would have been to have pitted around lap 36 or 37 while lap 41 would have been “a fourth place type of stop”. Instead, Hamilton continued for another nine laps.
By then the prediction was that he would end up seventh or eighth without pitting.
“You can see why, if you are playing a hand of poker like that, you are going to choose the best option and the best option for us, having missed out on the earlier call, was to come in and secure that fifth place,” said Allison.
He added that it was hard to see the team’s pace in Turkey, with Bottas dominant in the race and Hamilton fastest in practice and qualifying, as a yardstick for the future.
“It was a very good performance, the car was very well-balanced, we didn’t seem to suffer as much from the understeer that was fairly prevalent up and down the pit lane this weekend,” he said.
“But I don’t think you could read that automatically into the races to come.”
Allison said reliability, pitstops and weather would all be future factors but Mercedes were in with a fighting chance.