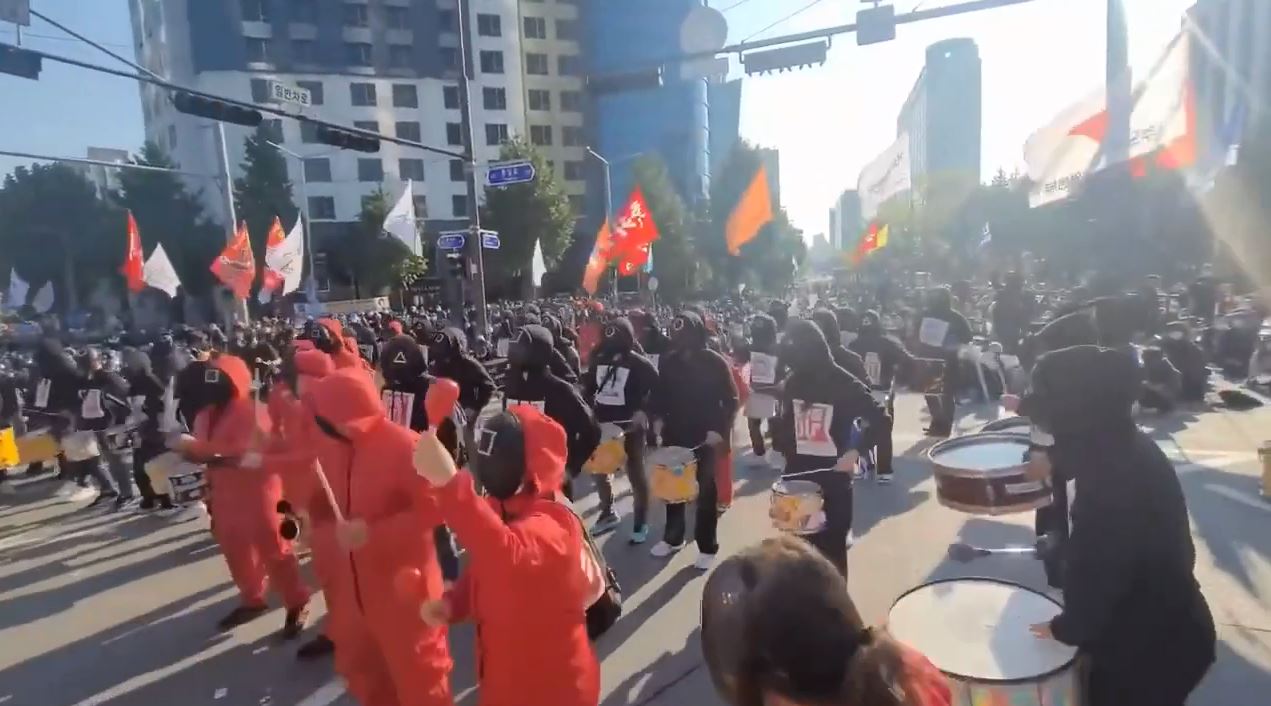 Thousands of members of the Korean Confederation of Trade Unions (KCTU) staged a nationwide demonstration on Wednesday, according to the group, including in downtown Seoul, where dozens of members dressed up in flamboyant jumpsuits and masks worn by actors in the Netflix show.

Made in South Korea, the nine-part thriller, in which cash-strapped contestants play deadly childhood games in a bid to win 45.6 billion won ($38 million), became a worldwide sensation for Netflix when it premiered in September.

Unionists dressed up in pink jumpsuits and masks with white circle, square or triangle symbols worn by guards in "Squid Game" were seen beating drums to loud music and dancing. Some held flags and signs reading “Inequality Out" and "Safe Youth Employment; Quality Youth Employment", footage from the group's YouTube channel showed.

"About 80 youth union members dressed up in costumes that parody the Squid Game, which bitterly satirizes the bare face of our society," KCTU said in a statement.

Seoul city has filed a complaint against the group with the police for staging illegal protests violating the infectious disease prevention law, the local government told Reuters.

The restrictions violate the basic rights granted by the Constitution and it is unfair that outdoor rallies are seen as more dangerous than sporting events where more spectators are allowed, KCTU spokesman Han Sang-jin told Reuters, when asked about the police complaint.

With about 1.1 million members overall, the KCTU represents workers at some of the biggest chaebols in the country, including Hyundai Motor, LG Chem and government-owned Korail Railroad Corp. The union workers are quite powerful, amassing fairly strong benefits over the years.

South Korean trade unions have a long history of activism but their recent rallies have led to confrontation with authorities trying to enforce curbs to stop the coronavirus as the rallies have been blamed for surge in Covid-19 cases.

Only one-person protests are allowed in the capital and surrounding areas under current social distancing rules.