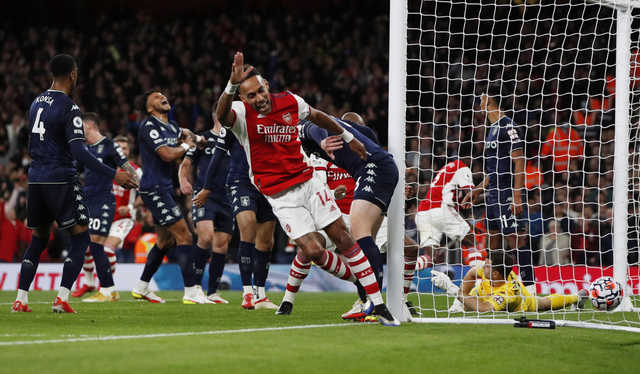 LONDON: Arsenal turned on the style with a confident 3-1 home win over Aston Villa in the Premier League on Friday to extend their unbeaten run to six games.

The win moves Mikel Arteta's side up to ninth spot, level on 14 points with sixth-placed Manchester United.

Thomas Partey headed in a corner to give the Gunners' a 23rd minute lead and they doubled the advantage before the break with Pierre-Emerick Aubameyang driving home after his penalty was saved by Villa's former Arsenal goalkeeper Emiliano Martínez.

Emile Smith Rowe made it 3-0 in the 56th, finishing a well worked counter-attack by cutting in from the left and seeing his low shot go in off the post after a slight deflection off Tyrone Mings.

Villa had been second best for most of the game but pulled a goal back eight minutes from the end when Jacob Ramsey curled the ball into the top corner after Leon Bailey had burst across the front of the penalty area.