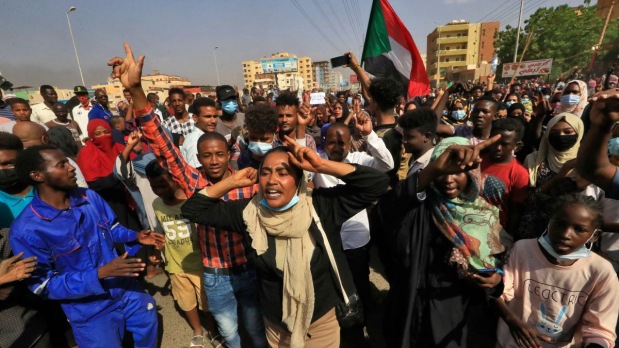 KHARTOUM: Sudan’s military seized power from a transitional government yesterday and soldiers killed at least two people and wounded dozens as street protests broke out against the coup.

The leader of the takeover, General Abdel Fattah Al Burhan, dissolved the military-civilian Sovereign Council that had been set up to guide the country to democracy following the overthrow of Omar Al Bashir in a popular uprising two years ago.

Burhan announced a state of emergency, saying the armed forces needed to protect safety and security, but he promised to hold elections in July 2023 and hand over to an elected civilian government then.

“What the country is going through now is a real threat and danger to the dreams of the youth and the hopes of the nation,” he said.

Youths opposed to the coup barricaded streets as clashes broke out with troops.

The Central Committee of Sudanese Doctors said two people had died of wounds after being shot by soldiers and at least 80 people had been injured.

Prime Minister Abdalla Hamdok was detained and taken to an undisclosed location after refusing to issue a statement in support of the takeover, the information ministry said.

The ministry, still loyal to Hamdok, urged resistance and said tens of thousands of people opposed to the takeover had taken to the streets and had faced gunfire near the military headquarters in Khartoum.

Troops had arrested civilian members of the Sovereign Council and government figures, it said, called on Sudanese to oppose the military.

“We raise our voices loudly to reject this coup attempt,” it said in a statement.

“Burhan cannot deceive us. This is a military coup,” said a young man who gave his name as Saleh.

White House spokesperson Karine Jean-Pierre said: “We reject the actions by the military and call for the immediate release of the prime minister and others who have been placed under house arrest.”

Britain called the coup an unacceptable betrayal of the Sudanese people. France called for the immediate release of Hamdok and other civilian leaders. Egypt called on all parties to exercise self-restraint.

The Sudanese Professionals Association, an activist coalition in the uprising against Bashir, called for a strike.

Burhan’s “reckless decisions will increase the ferocity of the street’s resistance and unity after all illusions of partnership are removed,” it said on its Facebook page.

The main opposition Forces of Freedom and Change alliance called for civil disobedience and protests across the country.

Two main political parties, the Umma and the Sudanese Congress, condemned what they called a coup and campaign of arrests.

Hamdok, an economist and former senior UN official, was appointed as a technocratic prime minister in 2019 but struggled to sustain the transition amid splits between the military and civilians and the pressures of the economic crisis.