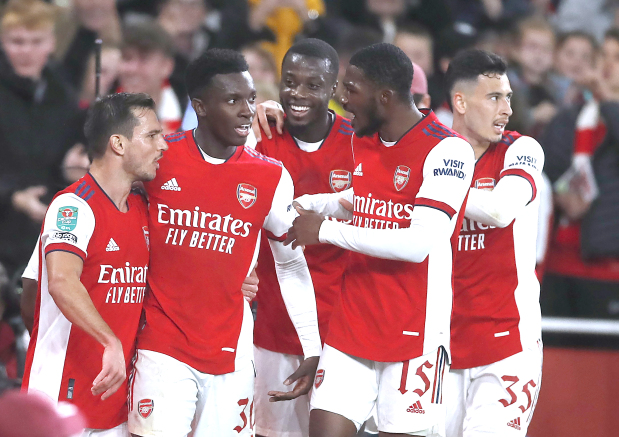 Arsenal eased through with second-half goals from Calum Chambers and Eddie Nketiah in a 2-0 win over struggling Leeds.

Chambers opened the scoring in the 55th minute, 23 seconds after coming on as a substitute. The defender’s header looked to have been saved by Illan Meslier but goal-line technology ruled that the ball had crossed the line.

The Gunners’ second came in the 69th from a poor header back by Liam Cooper which left Meslier stranded as Nketiah rounded the keeper and his mis-hit shot from a tight angle just rolled into the corner.

Chelsea needed penalties to get past Saints at Stamford Bridge after the game ended 1-1 following 90 minutes.

Thomas Tuchel’s side took the lead through a Kai Havertz header just before the break.

But Che Adams brought the Saints level inside three minutes of the second half after Chelsea keeper Kepa Arrizabalaga failed to hold a Kyle Walker-Peters drive and the Scotland striker converted from close range.

Arrizabalaga made amends late in the game with two fine saves as Southampton piled on some late pressure but the shootout belonged to the home side.

Reece James slotted in the decisive spot-kick as Chelsea ran out 4-3 winners on penalties after Theo Walcott and Will Smallbone failed to score for the Saints.

The North-East side won 3-1 on penalties after the game had ended goalless.