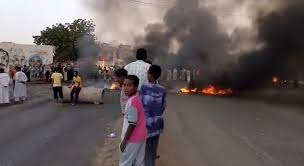 People gather around as smoke and fire are seen on the streets of Kartoum, Sudan, amid reports of a coup, October 25, 2021, in this still image from video obtained via social media. RASD SUDAN NETWORK via REUTERS

Sudan’s armed forces chief defended the military’s seizure of power, saying he had ousted the government to avoid civil war, while protesters took to the streets yesterday to demonstrate against the takeover after a day of deadly clashes.

Speaking at his first news conference since announcing the takeover, General Abdel Fattah Al Burhan said the army had no choice but to sideline politicians who were inciting against the armed forces.

“The dangers we witnessed last week could have led the country into civil war,” he said, an apparent reference to demonstrations against the prospect of a coup.