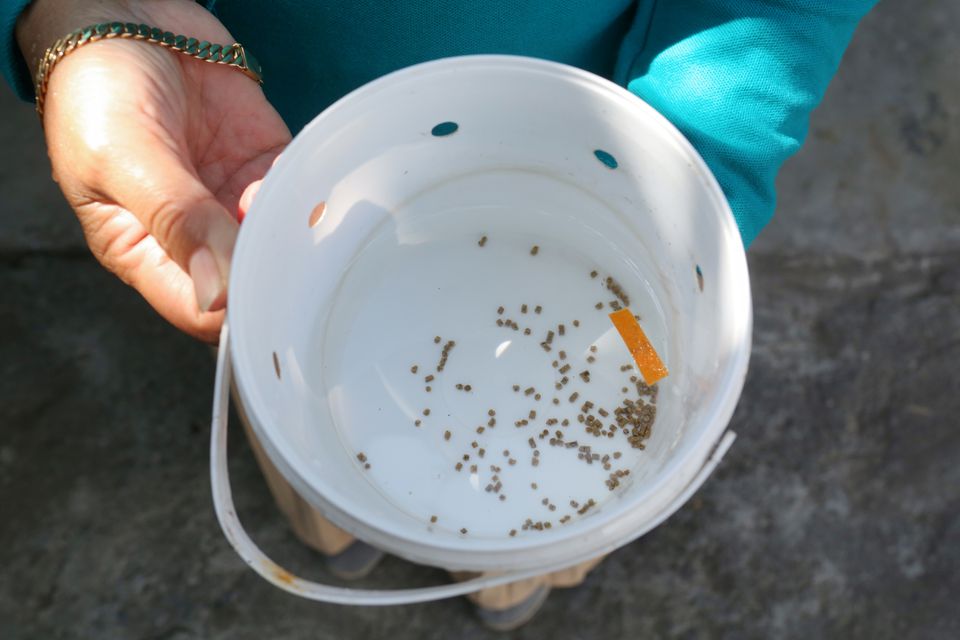 A volunteer of the World Mosquitoes Program (WMP) shows the Wolbachia mosquito eggs and its foods in a hatchery bucket in Yogyakarta, Indonesia, October 13, 2021.Reuters Photo

Researchers in Indonesia have found a way to fight disease-bearing mosquitoes by breeding a species of the insect which carries a kind of bacteria that prevents viruses like dengue from growing inside them.

Wolbachia is a common bacteria that occurs naturally in 60% of insect species, including some mosquitoes, fruit flies, moths, dragonflies and butterflies. It is not, however, found in dengue-carrying Aedes aegypti mosquitoes, according to non-profit World Mosquito Program (WMP), which initiated the research.

Since 2017, a joint study conducted by WMP at Australia's Monash University and Indonesia's Gadjah Mada University has been releasing lab-bred Wolbachia mosquitoes across a few dengue fever 'red zones' in the Indonesian city of Yogyakarta.

The trial results, published by the New England Journal of Medicine in June, showed that deploying mosquitoes with Wolbachia reduced dengue cases by as much as 77% and hospitalisations by up to 86%.

"We're confident in this technology, particularly for areas where the Aedes aegypti mosquito is the most responsible (infection) factor," WMP lead researcher Adi Utarini, who has been working on Indonesia's Eliminate Dengue Program since 2011, told Reuters.

According to the World Health Organisation (WHO), global dengue infections have risen rapidly in recent decades, with about half of the world's population now at risk. An estimated 100-400 million infections are reported every year.

"All three of my children have been infected with dengue and hospitalised ... It's always on my mind, thinking about how to keep my village healthy and clean," said 62-year-old Sri Purwaningsih, whose family volunteered for the WMP programme.