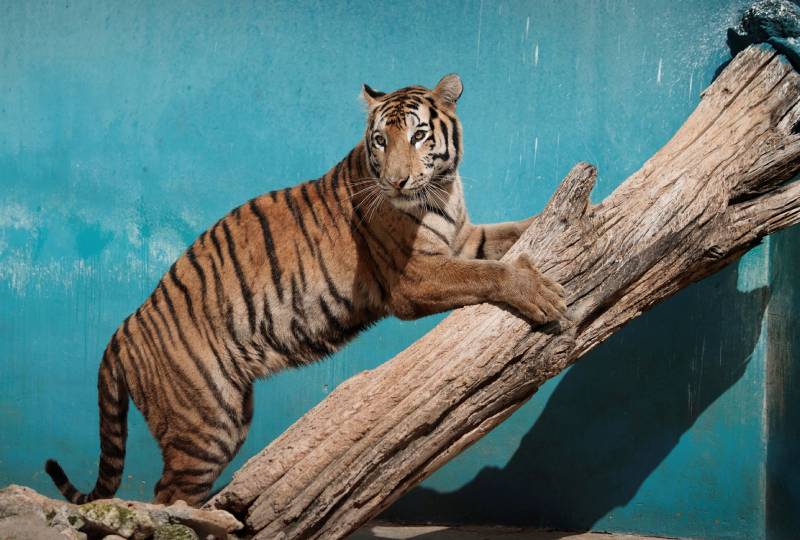 HAVANA: Zookeepers at Cuba's National Zoo say several species of exotic and endangered animals took advantage of the peace and quiet brought on by the coronavirus pandemic for romantic encounters that resulted in a bumper crop of baby animals.

The newborns include leopards, bengal tigers, zebras, giraffes, antelopes and oxen, a rarity officials attribute to the many months the zoo was closed during the pandemic, said zoo veterinarian Rachel Ortiz.

"Although the pandemic has been negative for humans, in the case of zoos it was beneficial," Ortiz told Reuters. "In particular our park has had more than 10 births of high-value species, in danger of extinction and that may at some point restore biological diversity."

Animals at Cuba's National Zoo took advantage of the peace and quiet brought on by the lockdown for romantic encounters that resulted in a bumper crop of baby animals https://t.co/G8zshDTccr pic.twitter.com/MMktXABtKq

Ortiz said that during a normal year, the prying eyes of too many visitors who flock to see the zoo's exhibits limit reproduction.

The National Zoo is a favourite attraction for Cubans, with 1,473 specimens of more than 120 species, including large animals such as elephants and rhinos.

Cuba, a Caribbean island of white sand beaches and turquoise waters popular with tourists, shuttered its borders for nearly two years amid the pandemic, and imposed strict quarantines domestically to limit the spread of the coronavirus.

"By not having the public in the exhibition areas, the animals are more calm," said Ortiz.

Shortfalls of food and medicine during the pandemic hit the zoo at times.

But Deborah Maso, a doctor who oversees the African savannah exhibits, said zoo workers were able to dedicate the time needed to assure the animals were successful in their endeavours.

Maso said the birth of a baby giraffe, a lanky, knock-kneed spotted female named Rachel, had been especially moving.

"The birth of a giraffe stood out," Maso said. "It was a great achievement, a great joy for me."

Visitors can now see the baby leopard and giraffe themselves - the National Zoo recently reopened to the public.