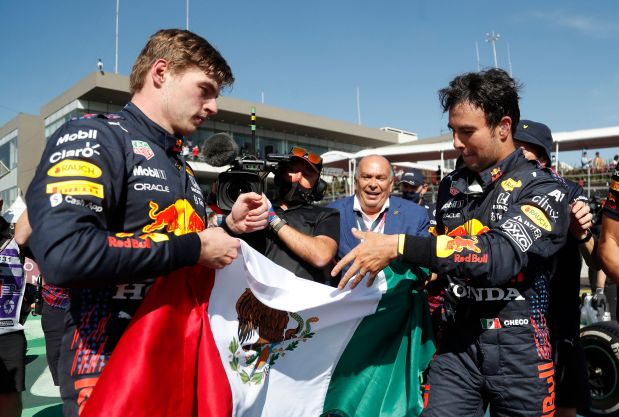 Hamilton slipped 19 points behind Verstappen, while Mercedes saw their overall lead in the constructors' standings slashed to one point. Mercedes had locked out the front row in qualifying, with Bottas on pole, but lost out to Verstappen at the start. Bottas was tagged by Ricciardo and spun, dropping to last. The Finn made four stops, one very slow and the last for fresh tyres to take the fastest lap and deny Verstappen a bonus point.

Verstappen, starting third, took his ninth win of the season after seizing the lead into the first corner. Perez started fourth but benefited from Bottas's spin. He became the first Mexican to lead his home race and first to stand on the podium in Mexico. It was his third successive top three finish and he chased Hamilton to the line, finishing 1.197 behind.

Ferrari overturned a 3.5 point deficit to McLaren and finished 13.5 points ahead. Leclerc let Sainz past, eventually, for the Spaniard to chase Gasly but the place was then handed back when it became evident he could not close the gap.

Norris started 18th due to an engine change penalty and made one stop. Ricciardo was seventh on the grid and made up places before hitting the back of Bottas's car and losing his front wing. That dropped him down to 17th. "For a few seconds it looked awesome and then it looked pretty un-awesome," the Australian said of his race. McLaren lost third to Ferrari.

Renault-owned Alpine clung on to fifth place thanks to Alonso's result but are level on points with AlphaTauri, staying ahead thanks to Ocon's Hungarian GP win. Alonso started 12th, Ocon at the back of the grid after an engine change. Ocon also hit Tsunoda and Schumacher at the start as the field avoided Bottas's Mercedes.

Gasly started fifth and moved up to fourth after Bottas spun. He then had a lonely race. Tsunoda started 17th due to an engine change and retired on the first lap after a collision with Ocon's Alpine that triggered the safety car.

Stroll started last after engine penalties, with an overtake on Russell the highlight of his race. Vettel was ninth on the grid and benefited from the collision between Bottas and Ricciardo.

Latifi started 13th, Russell 16th after a gearbox change dropped him down the grid. Russell ran as high as ninth early on before pitting on lap 15 and then going to the finish. Latifi did a two-stop race.

Giovinazzi ran as high as sixth on the opening laps before falling back and getting caught up in the battle between Ricciardo and Bottas. Raikkonen passed Russell early on.

Schumacher started 14th but made contact with Ocon's Alpine on the opening lap and retired with rear-left suspension damage. Mazepin had a slow pitstop.