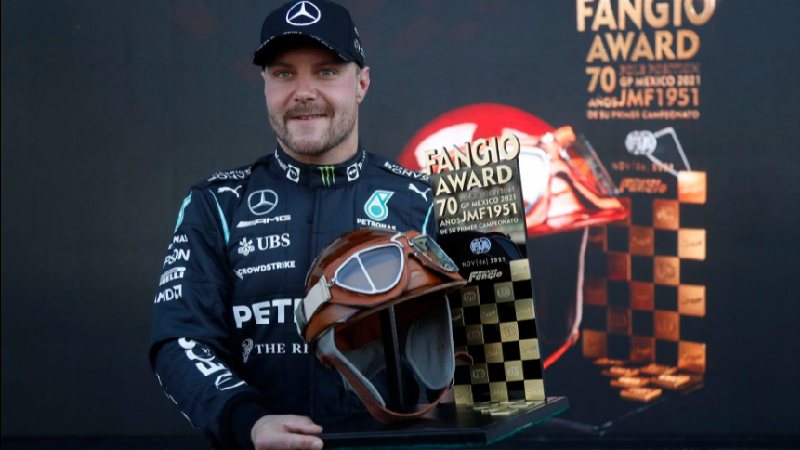 The outcome marked an extraordinary turnaround for Mercedes at a high-altitude circuit expected to favour Red Bull, whose Formula One championship leader Max Verstappen will start in third place.

Verstappen, 12 points ahead of Hamilton with five races remaining, had been half a second faster than Hamilton in Friday practice.

He was joined on the second row by team mate Sergio Perez, whose fastest time in final practice had triggered hopes of a first career pole at his home race.

Bottas set his time of one minute 15.875 seconds with his first flying lap of the final session at the Autodromo Hermanos Rodriguez and it stood, with Hamilton 0.145 behind after their final efforts.

"I definitely surprised myself," said the Finn, whose 19th career pole and third of the season earned him a replica of the helmet worn by late Argentine great Juan Manuel Fangio 70 years ago.

Hamilton, who can expect his team mate to play a supportive role on Sunday, agreed it was an unexpected twist to the afternoon with Mercedes fastest in all three phases of qualifying.

"We didn't think we had the pace this weekend. So to lock out the front row is pretty special," said the Briton, a two times winner in Mexico.

"They (Red Bull) were like six tenths ahead at one stage and then four tenths ahead, but whatever happened once we got to qualifying we had better pace. I'm just as shocked as everyone but we'll take it."

Verstappen struggled to get the tyres to work, with a lack of grip on his first flying lap and then the distraction of AlphaTauri's Yuki Tsunoda and Perez going wide ahead of him during his second lap.

"We were just really slow and terrible grip in Q3," said the Dutch driver, whose best lap was 0.350 slower than Bottas. "We just had a terrible qualifying."

The Dutch driver was heard over the radio saying "unbelievable, such a dumb idiot" in reference to another driver and the Red Bull team boss told Sky Sports television that Verstappen had been "Tsunoda-ed".

Australian Daniel Ricciardo was seventh and caught in a Ferrari sandwich, with Carlos Sainz sixth and Charles Leclerc eighth.

Ferrari and McLaren are fighting a tight battle for third overall, with the Italian team a mere 3.5 points behind their rivals.

Tsunoda was ninth but will drop to the back due to an engine penalty, as will McLaren's Lando Norris in 10th. That lifted Aston Martin's Sebastian Vettel and Alfa Romeo's Kimi Raikkonen to the last top 10 slots.

The first phase suffered a lengthy stoppage for repairs to the barrier after Aston Martin's Lance Stroll crashed out of the final corner with only seven drivers having set a time.

Stroll had been due to start at the back of the field anyway due to an engine change that exceeded his allocation for the season.

"I was a little bit too wide. It (the track) was a bit dirty out there and I lost it," said the Canadian after a trip to the medical centre for precautionary checks following the 12G impact.

Alpine's double world champion Fernando Alonso was the big casualty of that session, failing to make the cut in 16th place after George Russell sent his Williams through to the second phase.

The Spaniard will start 12th after grid penalties are applied to others.