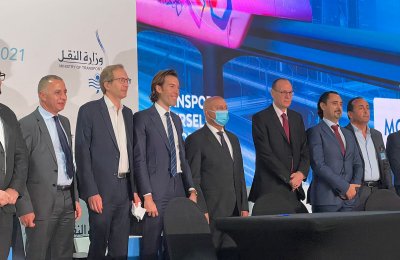 Global technology major Alstom has signed a framework agreement with the Egyptian National Railways Authority (ENR) to modernise the Tanta – Zifta – Zagazig mainline, covering approximately 65 km including nine main stations across the network.
The scope of work includes the design, supply, installation of the signaling, power, telecom systems, and trackside equipment for migration to ETCSL1, said the statement from Alstom.
In addition, the contract includes the testing and commissioning of signalling, telecom and power systems, civil works, trenching works and track-works including doubling of the track, it stated.
Alstom said it has been a partner to Egypt’s railways since 1971, supporting the railway infrastructure development in the country.
Alstom Egypt has established a strong local team and a Center of Excellence (COE) for signalling systems, power supply and maintenance workshops to support projects across its Africa-Middle East-Central Asia (AMECA) region.
The modernization of Tanta-Zifta-Zagazig mainline is one of the Ministry of Transport’s top priorities and part of Egypt’s plans to improve public transportation capacity and efficiency, it added.
The agreement was signed by Eng. Mustafa Abu Al-Makarem, Head of the National Authority for Egyptian Railways, and Andrew Deleone, Alstom AMECA President, in the presence of Eng. Ahmed El Sewedy, President and CEO of Elsewedy Electric and Mohamed Khalil, Alstom Egypt Managing Director during the TransMEA Exhibition & Conference.
Alstom is currently working on modernizing the Beni Suef Asyut line, stated Khalil.
"We are pleased to be selected for an additional signalling modernization project and to do it with Elsewedy Electric. This agreement builds on our long-term partnership with ENR and we remain committed to providing state-of-the-art signaling solutions to Egypt and its citizens," he noted.
According to him, Egypt’s vision and strong talent pool has enabled Alstom to make significant contributions to Egypt’s rail industry development.
Today, Alstom employs 500 people in Egypt with several ongoing projects including a consortium to design, implement, operate, and maintain two new Monorail lines connecting the New Capital City and 6th October City to Greater Cairo, he added.-TradeArabia News Service