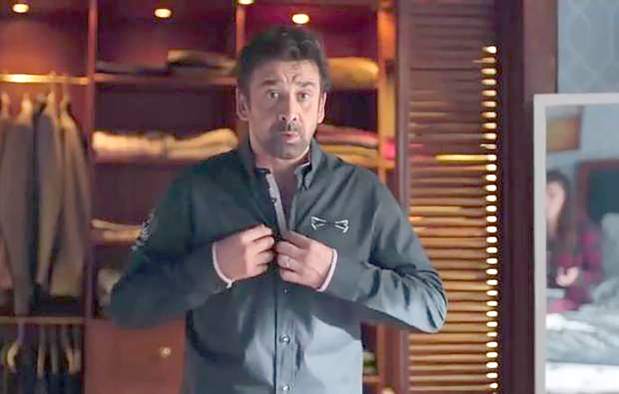 Karim Abdulaziz in a scene from the movie

It’s been a long time since Egyptian cinema has screened a film that is new in concept, entertaining and engages the audience.

The Men’s Secret Club has attractive elements that make it distinguishable and interesting, while also sparking public opinion on cheating spouses.

The film revolves around an underground club, where all cheating husbands gather to cover up for their extramarital relationships and activities.

The main character is Doctor Adham (played by Egyptian actor Karim Abdulaziz) who becomes a womaniser to avenge the “humiliation” caused by his wife Hajer (played by Egyptian Ghada Adel), who tracks his movements through GPS and video calls him at work several times a day.

His mistress is Fareeda (played by Syrian actress Nesreen Tafesh), who is being cheated into believing that he works as a pilot.

Another character involved in the plot is Fouad (played by top acclaimed Egyptian actor Maged El Kedwani) who is desperate to “become a womaniser” and cheat on his wife and so joins the club.

The underground club is managed by Hairam (played by Egyptian comedian Bayoumi Fouad) who recruits Chinese aids to help him cover up on the cheating husbands.

The movie provides proper storylines for each character, has smart dialogues and keeps filmgoers interested until the end.

The character development and masterfully written script by Ayman Uttar, who also has a supporting role as Adham’s neighbour, proves that this film is leading the pack in Arab cinema so far.

It is not surprising that the film is directed by Khaled El Helfawi, whose previous works included Get Dressed We Are Going Out which also raised social issues in an easily digested way for audiences.

Moviegoers shouldn’t miss out on this experience that showcases the comeback of Egyptian cinema following a decade of mediocre productions.