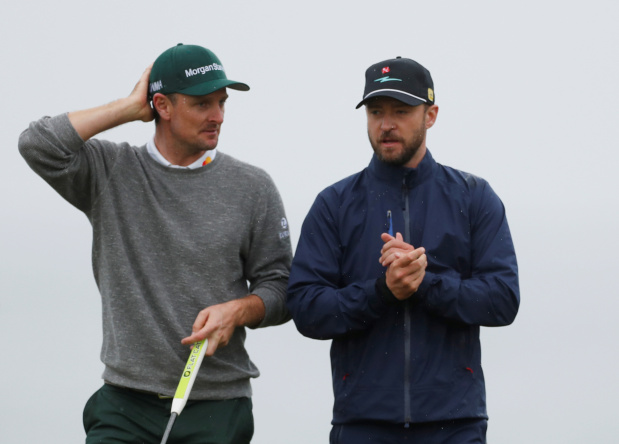 LONDON: Justin Rose set the stage to have a crack at breaking 60 at the Alfred Dunhill Links Championship in Scotland yesterday, only to finish the second round two strokes behind leader Matthew Jordan.

Rose, playing on the picturesque Kingsbarns course looking on to the North Sea, completed the front nine in only 28 strokes, thanks to six birdies and an eagle.

“It was an unbelievable front nine,” said the Englishman. “You never know when it’s going to happen like that. I was super relaxed.”

But the recent world number one, who was urged on by singer Justin Timberlake, his partner in the pro-am format, could not maintain the pace on the inward half.

A double-bogey at the par-four 11th ended any realistic chance of shooting 59, and he settled for an eight-under-par 64 that left him equal fifth behind Jordan, who also managed 64 on the St Andrews host course.

Like Rose, Jordan made his move on the generally easier front nine at the Old Course, reaching the turn in 29 strokes.

He picked up one more stroke coming home to post a 14-under 130 total, one stroke clear of fellow Englishman Matthew Southgate, Scot Calum Hill and Swede Joakim Lagergren.

Northern Irishman Rory McIlroy was six shots back after a 66 at Kingsbarns.

Jordan, who does not have full playing status on the European Tour, can take care of that and much more with victory this week.

“Now I’m in this position, I want to make sure I kick on and take care of my golf,” said the 23-year-old.