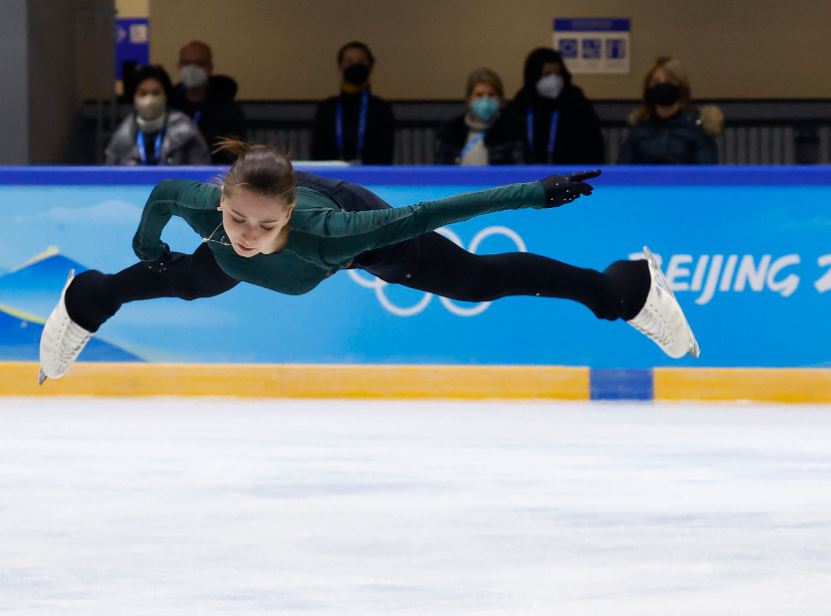 Kamila Valieva of the Russian Olympic Committee during training.(Reuters Photo)

Russian figure skater Kamila Valieva has argued that her positive drug test was caused by a mix-up with her grandfather's heart medication, an Olympic official said on Tuesday.

The 15-year-old's defence was revealed as Beijing braced for an unprecedented Olympic moment - the world's top figure skaters will compete in the evening's single competition with the likelihood they will not receive medals at the Winter Games.

Denis Oswald, the International Olympic Committee's permanent chair of the disciplinary commission, said Valieva claimed there was a mix-up at a Court of Arbitration for Sport (CAS) hearing into whether she should be allowed to continue competing.

"Her argument was this contamination happened with a product her grandfather was taking," Oswald said.

The Russian teenager was cleared by CAS to compete in the women's single event after a panel of three judges agreed with RUSADA's decision to lift a ban on her.

CAS, however, did not address the merits of her drug case, which now awaits a RUSADA hearing that is not expected until well after the Winter Games end.

Valieva was tested at her national championships on Dec. 25, but the positive test for the banned angina drug trimetazidine was not revealed until Feb. 8, after she had already competed at the Beijing Games in the team event.

WADA has questioned why the Russian anti-doping authority took so long to report the result.

Earlier, Oswald said in a press conference that Valieva's "B" sample had yet to be analysed, despite the initial positive result.

Under anti-doping rules, an athlete's urine is tested twice. If an athlete's 'A' sample is positive for a banned substance the testing lab must inform the authority responsible for the sample. In the case of Valieva, that is RUSADA.

The athlete can waive their right to have a "B" sample tested, but by doing so concedes the drug charge against them.

Otherwise, the disciplinary procedure against the athlete cannot start until both the 'A' and 'B' sample are tested.

RUSADA did not respond to inquiries about why the 'B' sample had not been tested.

CAS's decision to let Valieva compete, on the grounds that maintaining the suspension would cause her irreparable damage, has prompted outrage from athletes and officials around the world.

If Valieva finishes in the top three of the women's single event, which starts at about 6 p.m. on Tuesday with the short programme and ends with the free skate on Thursday, the medal ceremony will not be held during the Winter Games.

Valieva, who wowed the world by performing quadruple jumps in the team event, is the overwhelming favourite for the single.

The dazzling form of her team mates Anna Shcherbakova and Alexandra Trusova means the Russians have a real chance at a clean sweep of the podium.

The delayed medal ceremony for the Feb. 7 team event, in which the U.S., Japan and Canada finished behind the Russian Olympic Committee, also cannot go ahead because of Valieva's positive result.

"We want to allocate the medal to the right person," Oswald told a press conference.

Valieva spoke to Russia's Channel One after practice on Monday.

"These (past few) days have been very difficult for me," she said. "It's as if I don't have any emotions left. I am happy but at the same time I am emotionally tired."