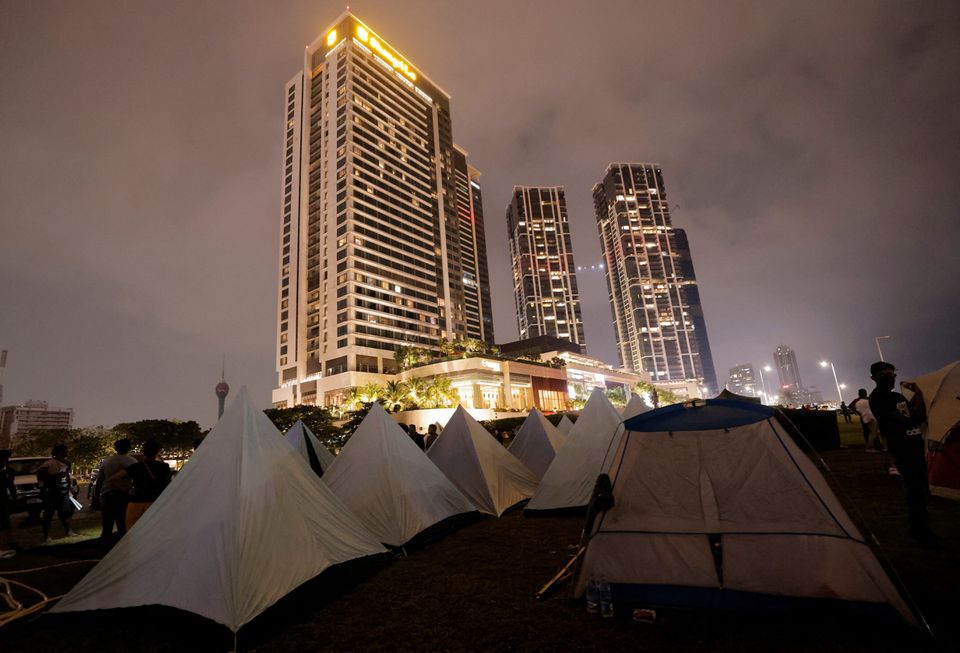 General view of a protest area, dubbed the Gota-Go village, where people are gathering in opposition to Sri Lanka's President Gotabaya Rajapaksa near the Presidential Secretariat is seen, amid the country's economic crisis, in Colombo, Sri Lanka, April 11, 2022. Reuters Photo

COLOMBO: Supporters of Sri Lanka's ruling party stormed a major protest site in the country's commercial capital Colombo on Monday, attacking anti-government demonstrators and clashing with police who used tear gas and water cannon to drive them back.

Protests against President Gotabaya Rajapaksa's government have raged for weeks amid the country's worst financial crisis since independence, with thousands demanding Rajapaksa and his influential family quit for mishandling the economy.

On Monday, hundreds of ruling party supporters rallied outside the official residence of Prime Minister Mahinda Rajapaksa, the president's elder brother, before marching to a anti-government protest site outside the presidential office.

At the "Gota Go Gama" protest site, a tent village that emerged that last month to become the focal point of national protests, pro-government supporters - some armed with iron bars - attacked anti-government demonstrators, according to a Reuters witness.

Police used dozens of tear gas rounds and water cannon to break up the confrontation, the first major clash between pro-and anti-government camps after a wave of nationwide protests began in late March.

At least nine people injured in the clashes and facing breathing difficulties after inhaling tear were taken to Colombo's National Hospital, a hospital official said, declining to be named.

"This is a peaceful protest," Pasindu Senanayaka, an anti-government protestor told Reuters. "They attacked Gota Go Gama and set fire to our tents."

"We are helpless now, we are begging for help," Senanayaka said, as rings of black smoke spiralled out of a burning tent nearby and parts of the protest camp lay in disarray.

Dozens of paramilitary troops with riot shield and helmets were deployed to keep both groups apart after the initial clashes, and a curfew has been imposed across Sri Lanka's Western Province, which includes Colombo, a police spokesman said.

Facing escalating anti-government protests, Rajapaksa's government last week declared a state of emergency for the second time in five weeks, but public discontent has steadily simmered, most recently because of a lack of cooking gas.

Sri Lankan energy companies said on Monday they were running low on stocks of liquid petroleum gas mainly used in cooking, as shortages of foreign exchange put renewed pressure on the island nation.

"With the involvement of the President we will get $7 million from the central bank to pay for a 3,500 metric tonne (MT) shipment, which is expected to arrive on Tuesday," he said.

The second player in Sri Lanka's duopoly, Laugfs Gas, has less than 2000 MT of gas, which has been reserved for industries and hospitals. The company is also struggling to find dollars and is currently in talks to use its overseas assets to open letters of credit.

"We are a bankrupt nation. Banks don't have sufficient dollars for us to open lines of credit and we cannot go to the black market. We are struggling to keep our businesses afloat," Laugfs chairman W.H.K Wegapitiya said.

He estimated it would take at least another week for the company to secure a gas shipment.

Sri Lanka has approached the International Monetary Fund for a bailout, and will begin a virtual summit on Monday with officials from the multilateral lender aimed at securing emergency assistance.