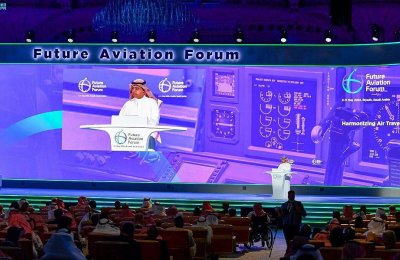 Saudi Arabia aims to boost its investments in the transport and logistics sector by more than $100 billion as part of a long-term strategy which will see the kingdom transport 300 million passengers and five million tonnes of goods and also link 250 global destinations in the next 10 years, reported SPA, citing a senior minister.
As part of this plan, Saudi Arabia will launch new airlines and also develop facilities and services through two new centres in Riyadh and Jeddah, revealed Saleh Al Jasser, Saudi Arabia’s Minister of Transport, after inaugurating the Future Aviation Forum, being organised by General Authority for Civil Aviation (GACA) in Riyadh.
The three-day forum, which is being held under the patronage of King Salman, focuses on three main aspects of innovation, growth and sustainability, which are main and effective aspects in the civil aviation sector.
A total of 60 countries are participating and more than 4,000 people have registered in the forum’s events being held at the King Abdulaziz International Conference Center.
"There are many opportunities for the private sector to realise our ambitions," stated Al Jasser, while addressing the gathering today (May 9).
He pointed out that the ministry has converted more than 25 airports into holding companies as a first step towards privatization. "In addition we have also approved hundreds of applications for new planes and opening of new destinations for several countries," said the minister.
Through a visual presentation, the minister reviewed aviation services and Saudi Arabia’s openness to the world and reviewed promising opportunities for the international aviation sector, where the kingdom is connected with 250 global destinations with three times the number of passengers and five times the volume of goods, expressing hope for Saudi Arabia to become the number one at the level of the Middle East by 2030.
The Future Aviation Forum will witness signing over 50 agreements and memorandums of understanding, in addition to launching several important policies and strategies for the civil aviation sector, and signing a large number of partnerships between the public and private sectors, remarked Al Jasser.
A total of 60 countries are participating in the forum with over 2,000 participants and more than 4,000 people who registered in the forum’s events.
In his address, GACA President Abdulaziz bin Abdullah Al Duailej reiterated the importance of joint work (as a joint industry) to face future crises, noting that the only way to implement this is through putting wills to compete aside and hold a permanent cooperation that can enable the industry collectively to respond to any future epidemic and its impacts on businesses.
The global economy had relied on itself in the international and local aviation industry, stated Al Duailej, adding that the industry, prior to the pandemic, had generated $1 trillion of economic activity.
GACA, he stated, in cooperation with leading industrial authorities across the world, seeks to realize the harmonious air travel policy required for the industry’s operation in times of future health emergencies in various fields, including: coordinating reporting systems for all countries; establishing the best digital communication systems in its category to enable all aviation operators and governments to communicate effectively at the real time regarding issues related to developments in the health emergencies; putting proper global administration and coordination systems that can enable flexibility when necessary; and ensuring the establishment of health compliance mechanisms.
The sessions of the first day saw the participation of Prince Abdulaziz bin Salman bin Abdulaziz, the Minister of Energy; Prince Turki bin Talal bin Abdulaziz, Governor of Asir Region; several senior officials and ministers of transport, heads of civil aviation authorities, and ambassadors of Arab and non-Arab countries, reported SPA.
The forum is considered a unique international event in the civil aviation sector for providing an opportunity to exchange knowledge and ideas and discussing the best experiences and practices in developing resources and capacity.