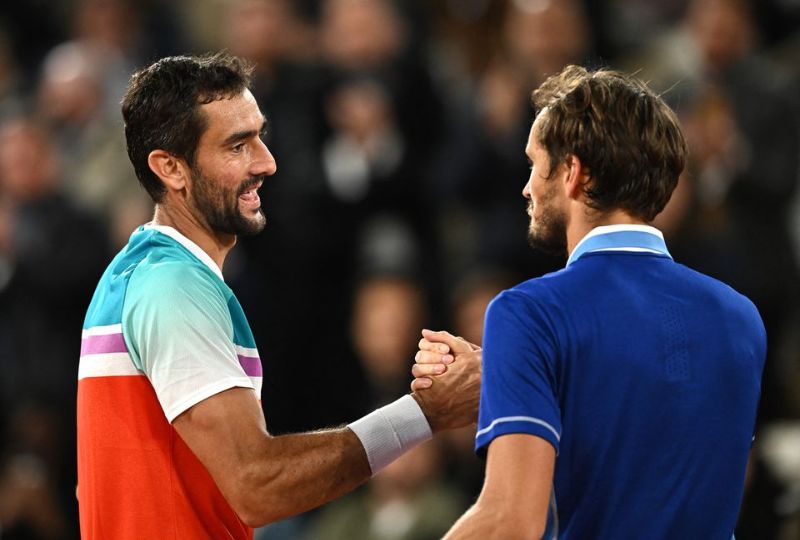 PARIS - Croatian Marin Cilic did not put a foot wrong as he crushed Russia's world number two Daniil Medvedev 6-2 6-3 6-2 in a lopsided contest on Monday to return to the French Open quarter-finals after a gap of four years.

The 2014 US Open champion, seeded 20th, dominated proceedings from the start and finished off the contest in an hour and 45 minutes to reach the last eight stage on the Parisian clay for the third time in his career.

Medvedev came into the match having won all three previous meetings against the 33-year-old Croatian but cut a sorry figure under the lights on Court Philippe Chatrier in their first contest on clay.

"It was absolutely a fantastic match from the first point to the last," Cilic said in his interview on court.

"I enjoyed the atmosphere, enjoyed the night session here, played incredible tennis, one of the best matches of my career from start to finish."

Such was the Croatian's domination that he did not face a break point and will next meet another Russian in seventh seed Andrey Rublev for a place in the semi-finals.

Cilic played aggressively, pinning Medvedev behind the baseline and advancing to the net at every opportunity as the Russian failed to find any zing behind his flat groundstrokes in the cooler night conditions.

Unable to find a solution to Cilic's pinpoint winners, Medvedev kept shaking his head and also poured out his frustration at the chair umpire over what he felt was very little time to rest during changeovers.

Medvedev's form on the night was more reminiscent of his four consecutive first-round exits at Roland Garros before he made the quarter-finals last year.

Cilic won four consecutive games from 2-2 to bag the opening set in 31 minutes and another break in the sixth game was enough for him to take the second set.

Australian Open finalist Medvedev, who won the 2021 US Open, then took a lengthy toilet break but served a double fault on his first point after returning to court.

Another double fault in that opening game led to Medvedev getting broken.

The 26-year-old's problems with double faults and unforced errors continued as Cilic broke him again to jump into a 4-0 third-set lead.

There was no way back for Medvedev, who briefly rose to world number one earlier this year, and Cilic converted his second match point when the Russian found the net with a backhand return.

"When I'm playing my best tennis, everything is working out, from the serve, return, movement. These last 10-15 days were great for me - great training, great matches, very consistent tennis," Cilic added.

"Against guys like Daniil you have to be able to sustain that high level throughout the match and if you give him a chance, he's going to be back. So I was really focused to keep going and definitely extremely pleased with that."