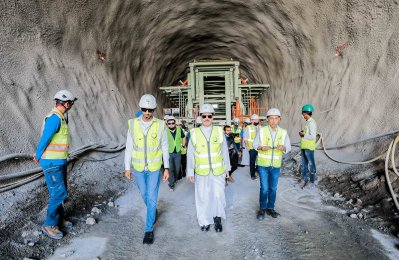 Dubai Electricity and Water Authority (Dewa) has completed 44% of its pumped-storage hydroelectric power station being built in Hatta region.
Once ready, it will have a production capacity of 250 MW, a storage capacity of 1,500 MWhours and a life span of 80 years.
As part of the project, Dewa will develop a 5.4-km-long cable car route and also the Dubai Mountain Peak at an altitude of 1,300 metres (the summit of Jebel Umm Al Nisour). The Hatta Sustainable Waterfalls will contribute to the overall development in Hatta and provide innovative job opportunities for its citizens in the Hatta region.
Saeed Mohammed Al Tayer, MD and CEO of Dubai Electricity and Water Authority (Dewa), visited the Hatta station, a first of its kind in the GCC built at an investment of AED1.421 billion, to review its progress.
"Dewa’s projects will provide around 200 technical, administrative and operational jobs in Hatta. Another 300 jobs are expected to be created by the Visitor Centre, and other outdoor activities and tourist facilities associated with the project," stated Al Tayer.
The Dewa chief later inspected the construction site of the hydroelectric power station and was briefed on the project’s progress. He also inspected the construction of the power generators and the upper dam, whose first 37-m-high Roller Compacted Concrete (RCC) wall has been completed.
Work is currently underway on the 70-m main dam wall. The station will use water in the Hatta Dam and an upper dam being built in the mountain. During the visit, Al Tayer also reviewed the work progress of the 1.2 km subterranean tunnel, which connects the two dams.-TradeArabia News Service