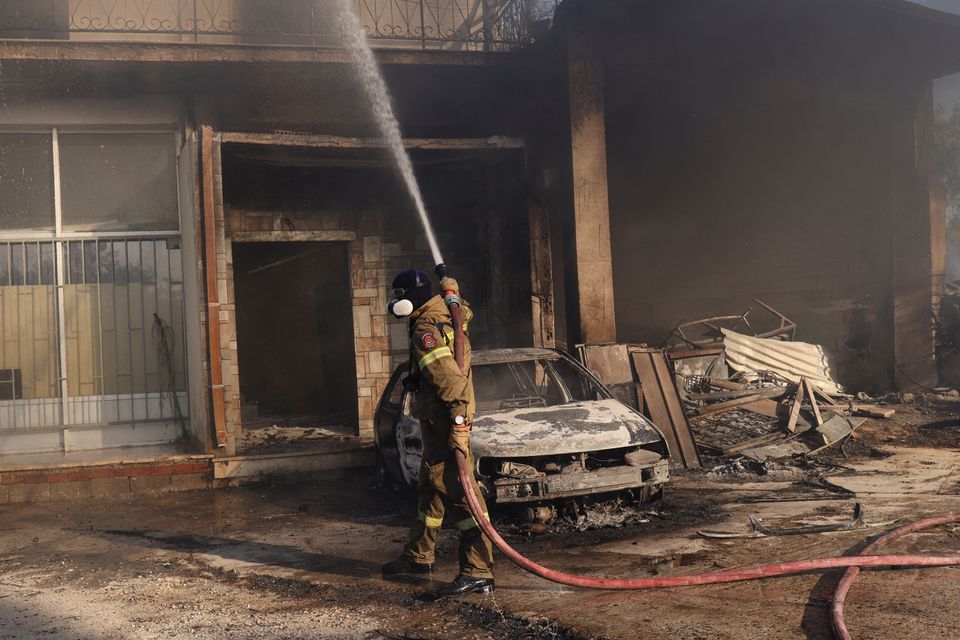 A firefighter tries to extinguish a wildfire burning in Pallini, near Athens, Greece July 20, 2022. Reuters Photo

ATHENS/LONDON:  A wildfire fuelled by gale-force winds raged in mountains near Athens on Wednesday, forcing hundreds including hospital patients to evacuate, as Britain counted the cost of its hottest ever day.

Wildfires have ravaged Europe this month, breaking out in Greece, France, Spain, Turkey, Italy and Portugal and fuelled by increasingly hot and dry weather that scientists link to climate change.

Thick clouds of smoke darkened the sky over Mount Penteli 27 km (16 miles) north of Greece's capital, where close to 500 firefighters, 120 fire engines and 15 water-carrying planes tried to contain the flames.

The blaze, which broke out on Tuesday afternoon, continued to burn on several fronts on Wednesday.

Authorities said they evacuated nine settlements. One hospital and the National Observatory of Athens were also evacuated and police helped at least 600 residents out of fire-stricken areas.

"It was a difficult night," said Fire Department spokesperson Yiannis Artopios in a televised statement, adding that wind speeds exceeded 80 kilometres (50 miles) per hour. Strong winds were forecast to persist until Wednesday afternoon.

"Due to the intensity and speed of the winds, the fire constantly changed direction throughout the night," he said.

Last year, wildfires ravaged about 300,000 acres (120,000 hectares) of forest and bushland in different parts of Greece as the country experienced its worst heatwave in 30 years.

In France, where firefighters in the southwestern Gironde region have been battling since July 12 to contain huge forest fires, Agriculture Minister Marc Fesneau said more money needed to be invested to tackle such threats.

"We are having to confront a quite exceptional situation," he said, referring to damage caused in Brittany and southern France. President Emmanuel Macron was due to visit the Gironde region on Wednesday.

In Britain, firefighters worked through the night to damp down wildfires and engineers raced on Wednesday to fix train tracks that buckled in the heat as residents woke up to the aftermath of a day when temperatures topped 40C for the first time.

"This is a reminder today, I think, of the importance of tackling climate change because this is a remarkable unprecedented event," Treasury Minister Simon Clarke said.

The London Fire Brigade endured its busiest day since World War Two on Tuesday as fires destroyed dozens of properties in the capital and sent flames racing through tinderbox-dry grassland at the sides of railway tracks and roads.

Trains running from London up the east coast of England were cancelled at least until midday on Wednesday after a fire near the city of Peterborough in central England damaged signalling equipment. Other fires on the network damaged tracks and overhead lines.

The weather also played havoc with transportation networks in Germany, where water levels on the river Rhine fell further, navigation authorities said on Wednesday. That was forcing cargo vessels to sail with significantly reduced loads and hampering shipping on the entire river in Germany south of Duisburg, they said.