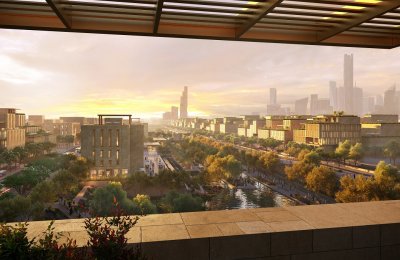 The board of directors of Sports Boulevard Foundation, chaired by HRH Crown Prince Mohammed bin Salman bin Abdulaziz, has launched the design code for Prince Mohammad bin Salman Road.
The Sports Boulevard is one of mega projects being developed in Saudi capital Riyadh which boasts 4.4 million sq m of greenery and open spaces, and up to 50 multidisciplinary sports facilities.
Launched by King Salman Bin Abdulaziz Al Saud in 2019, the mammoth project is set to become the longest linear park in the world extending more than 135km on Prince Mohammed bin Salman bin Abdulaziz Road connecting Wadi Hanifah in the West with Wadi Al Sulai in the East through a grid of safe green pathways for pedestrians, cyclists, and horse-riders, said the statement from Sports Boulevard Foundation.
Artistic landmarks feature throughout in addition to several unique districts and investment zones, totaling an area spanning over 2.3 million sq m, it stated.
According to the board members, the design code is driven by the principles of Salmani Architecture, curated by the efforts of King Salman, which is based on both - originality and modernity.
It ensures to improve the modern design quality while highlighting the current local architectural identity. The style is featured by its flexibility, vitality, and variety of elements, not mimeographing the old urban vocabulary on new projects, but rather allowing the architect to choose innovative elements, inspired and imitated by the past with new design templates, they noted.
The Design Code, they said, aims to provide a modern and sustainable environment that enhances the quality of life by improving the architectural design quality, urban planning regulations, building regulations, parking regulations, environmental regulations, as well as land use and shop signs.
In addition to this, this also unifies the urban structures and stimulating investment and real state elements as per global standards.
The aim of the Design Code is to provide regulation standards for engineering design and is a reference guide for all the current and potential commercial and residential property owners, developers, and investors, contributing to a design pattern that will harmonize the paths of Sports Boulevard for pedestrians, cyclists, and horse riders, forming a modern and sustainable environment for Riyadh residents and visitors, they added.-TradeArabia News Service