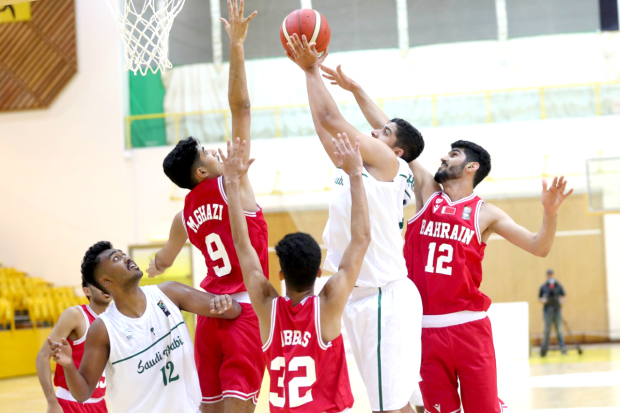 Saudi Arabia managed to stave off a spirited charge by Bahrain last night before registering a 71-63 win in the last league game of the FIBA Under-18 Asian Championship Gulf Basketball Association (GBA) Qualifier in Dubai.

With just three minutes left in the game and Saudi Arabia leading 62-59, Naser Alanzoor – Bahrain’s star performer in the tournament – sank a sublime three-pointer to level the score.

But, just seconds later, Saudi Arabia’s Mohammed Abdullah Alhawsawi scored a two-pointer to put his team ahead at 64-62.

Half a minute later, Bahrain had the opportunity to get ahead but an Alanzoor attempt to get another three-pointer just bounced off the basket’s rim.

Saudi’s Ridha Adel, then, managed to net his three-point jump shot and, with only a minute and a half left till the final buzzer, his team were leading 68-62 and looking likely winners. And when he scored a two-pointer with just 45 seconds left in the game, the contest was all but over with the Saudis leading 70-63. They managed to add one more point before the clock ticked to full time.

Earlier, Bahrain managed to overturn a 11-point deficit at half time, when they were trailing 26-37, into a slim, one-point lead at the end of the third quarter, heading into the change room with the score reading 47-46 in their favour, with momentum, also, on their side. But, despite managing to take the lead twice in the last quarter, before entering the last five minutes of the match with the score tied at 56-56, Bahrain saw the game slip away from them in the last 90 seconds.

Despite their third consecutive loss in the six-team tournament, however, Bahrain still managed to qualify for the semi-finals. Saudi Arabia’s win propelled them to second place in the points table, which is headed by Qatar, with Kuwait in third place. Hosts UAE and Oman failed to make the cut.

Fourth-placed Bahrain will take on Qatar in their semi-final tomorrow – the second time the two teams will have met in the tournament. Qatar won 63-47 in the league match last Monday.

Kuwait and Saudi Arabia will face off against each other in the second semi-final.