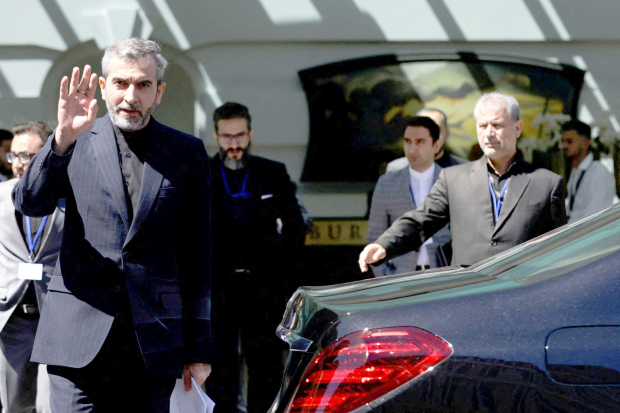 Indirect talks between Tehran and Washington restarted in Vienna on Thursday with a meeting between Iran’s chief nuclear negotiator and European Union co-ordinator Enrique Mora.

Reuters, citing one Iranian and one European official, reported in June that Tehran had dropped a major stumbling block – its demand for the removal of its Revolutionary Guards from a US sanctions list.

A senior Iranian official appeared to dampen any such prospect, telling Reuters on Thursday: “We have our own suggestions that will be discussed in the Vienna talks, such as lifting sanctions on the Guards gradually.”

After meeting Iran’s negotiator yesterday, Russian envoy Mikhail Ulyanov was quoted by Iran’s state news agency IRNA as saying that reaching the finish line “may not be so easy, and time will tell whether we will succeed or not.

“But in general, the atmosphere of the talks is serious.”

White House national security spokesman John Kirby said on Thursday that the negotiations were “pretty much complete at this point”.

Bagheri Kani put the onus on the White House to compromise, tweeting that the United States should “show maturity & act responsibly.”

Little remains of the 2015 pact between Iran and the United States, Britain, France, Germany, Russia and China, which lifted sanctions against Tehran in exchange for curbs on Iranian enrichment activity the West fears could yield atomic bombs.

In 2018 then-President Donald Trump ditched the deal and reimposed harsh sanctions. In response, Tehran breached the deal in several ways including rebuilding stocks of enriched uranium.

As Iran has refused to hold direct talks with its longtime arch-foe the United States, Mora shuttles between Bagheri Kani and the US Special Envoy for Iran, Rob Malley.

The Vienna negotiations broke down earlier this year chiefly over Tehran’s demand that Washington remove the Revolutionary Guards from the US Foreign Terrorist Organisation (FTO) list. The US has refused to do so.

A European official said on Thursday: “It has been agreed that (removing the Guards from the FTO list) will be discussed in the future once the US and Iran can meet directly.”