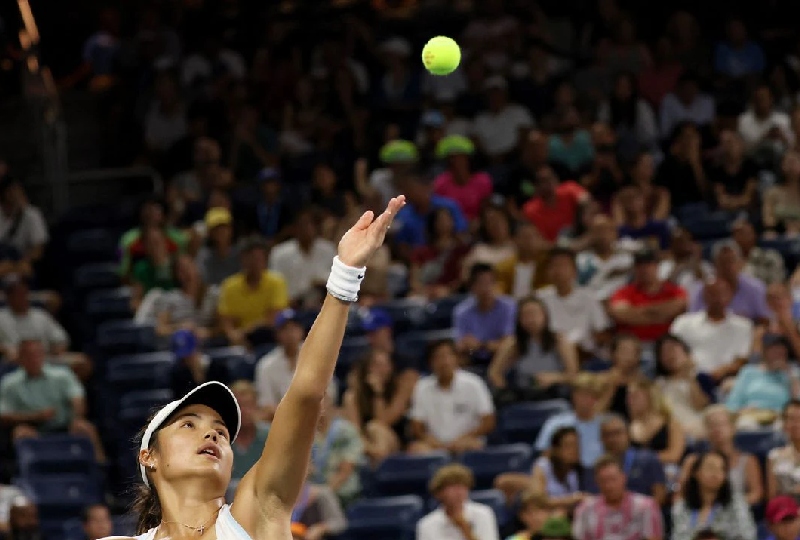 Emma Raducanu's US Open title defence ended at the first hurdle on Tuesday while Wimbledon champion Elena Rybakina and twice US Open winner Naomi Osaka were also ousted in the opening round.

British teenager Raducanu made a dream run to the title as a qualifier last year but her return to court at Flushing Meadows was less memorable as she fell 6-3 6-3 to Frenchwoman Alize Cornet.

"Obviously really disappointing. Really sad to leave here. It's probably my favourite tournament," Raducanu said. "In a way I'm happy because it's a clean slate... The target will be off my back slightly."

World number one Iga Swiatek cruised into the second round after crushing Italy's Jasmine Paolini 6-3 6-0, but two-time U.S. Open winner Venus Williams bowed out after losing 6-1 7-6 to Alison van Uytvanck of Belgium.

Rafael Nadal, returning to Flushing Meadows for the first time since winning the 2019 title, overcame an early scare to see off 21-year-old Australian wildcard Rinky Hijikata 4-6 6-2 6-3 6-3.

Third seed Carlos Alcaraz, who became the youngest man to reach the quarter-final in New York a year ago, advanced after his Argentine opponent Sebastian Baez retired when the Spanish teenager was leading 7-5 7-5 2-0.

Two-time US Open champion Naomi Osaka fell 7-6(5) 6-3 to Australian Open finalist Danielle Collins, who fought back from a break down in both sets to reach the second round.

0412 SCHWARTZMAN THROUGH AFTER SOCK RETIRES INJURED

Argentine 14th seed Diego Schwartzman advanced to the second round after his American opponent Jack Sock retired with an injury while leading 6-3 7-5 0-6 0-1.

Four-time US Open champion Rafael Nadal recovered from a set down to beat Australian wildcard Rinky Hijikata 4-6 6-2 6-3 6-3, staving off a late fightback from the 21-year-old before closing out the win with a blistering forehand winner down the line.

Nadal, making his first appearance at Flushing Meadows since winning the 2019 title, will take on Italian Fabio Fognini in the second round.

Belarusian Victoria Azarenka, a three-time US Open finalist, was 6-1 3-0 up in the second set before letting her lead slip against American qualifier Ashlyn Krueger but bounced back in the decider to clinch a 6-1 4-6 6-2 victory.

Azarenka will face Marta Kostyuk of Ukraine in the second round.

0122 RADUCANU KNOCKED OUT BY CORNET

Defending champion Emma Raducanu was knocked out in straight sets by Alize Cornet, going down 6-3 6-3 to the Frenchwoman.

Cornet is playing in her 63rd consecutive Grand Slam main draw, a record in the Open era.

Sofia Kenin, the 2020 Australian Open champion, was knocked out in straight sets by Wimbledon quarter-finalist Jule Niemeier who came away with a 7-6(3) 6-4 victory.

Fabio Fognini was the third Italian to play a five-setter on Tuesday, mounting a comeback from two sets down to beat Aslan Karatsev 1-6 5-7 6-4 6-1 6-4. Both players made over 60 unforced errors and were broken 13 times in total.

Sam Querrey, playing in his last tournament before retirement, became the latest American to make a first round exit, losing 4-6 6-4 7-6(8) 6-3 to Belarusian Ilya Ivashka.

Eighth seed Hubert Hurkacz had no problems dispatching Oscar Otte, who did not have a single break point opportunity in a 6-4 6-2 6-4 defeat.

Belgian Alison Van Uytvanck beat 42-year-old Venus Williams 6-1 7-6(5) to advance to the second round, a day after the American's sister and doubles partner Serena advanced.

"It's always an honour to play a legend. ...I was so happy to play her on Arthur Ashe, I had goosebumps," Van Uytvanck said.

1936 RYBAKINA KNOCKED OUT BY QUALIFIER

Former champion Sloane Stephens fought back from a set down to beat Greet Minnen 1-6 6-3 6-3 at Louis Armstrong Stadium.

1844 ALCARAZ THROUGH AFTER BAEZ RETIRES INJURED

Third seed Carlos Alcaraz advanced to the second round after his Argentine opponent Sebastian Baez retired with an injury when he was down 7-5 7-5 2-0.

"Nobody wanted to see a match end like this... Sebastian's a great player, he fought until the last point," Alcaraz said.

Former world number one Karolina Pliskova overcame Magda Linette 6-2 4-6 7-6(8) in a match where there was little to separate the two players until the final set tiebreak.

1657 SWIATEK CRUISES INTO SECOND ROUND

World number one Iga Swiatek handed Jasmine Paolini a bagel en route to reaching the second round, as she eased past the unseeded Italian 6-3 6-0 in 67 minutes.

Joining her was American eighth seed Jessica Pegula who beat Viktorija Golubic 6-2 6-2 and sixth-seeded Belarusian Aryna Sabalenka after her 6-1 6-3 win over Catherine Harrison.