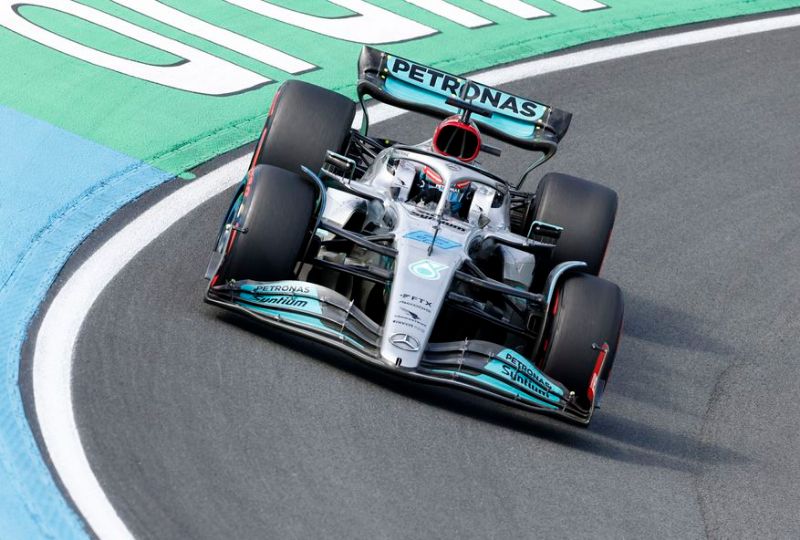 Russell lapped the tight and twisty seaside Zandvoort circuit with a fastest lap of one minute 12.455 seconds on the soft tyres late in the session.

Seven times world champion Hamilton was 0.240 slower than his team mate, and said he was struggling to hear radio messages.

Ferrari's Carlos Sainz ended up third on the timing screens and the McLarens of Lando Norris and Daniel Ricciardo were fourth and fifth.

Home hero Verstappen, winner from pole position last year and returning as world champion to packed grandstands, came to a halt 10 minutes into the session and after just seven laps as red flags were waved.

"Something went with the gearbox," he told his race engineer over the radio.

"We lost drive whilst he took a shift from fourth to fifth," said team boss Christian Horner. "We have to get it turned around quickly for the next session."

Verstappen's Mexican team mate Sergio Perez ran wide onto the grass and was only seventh fastest with the Alpines of Fernando Alonso and Esteban Ocon eighth and ninth.

"Nothing specific, just working on a balance. Sergio usually feels his way into a P1 and there were certain things he wasn't happy with about the car," Horner said of Perez.

Verstappen, 19th of 20 in the session, is 93 points clear of Perez with eight races remaining and will be chasing his 10th win of the season on Sunday.