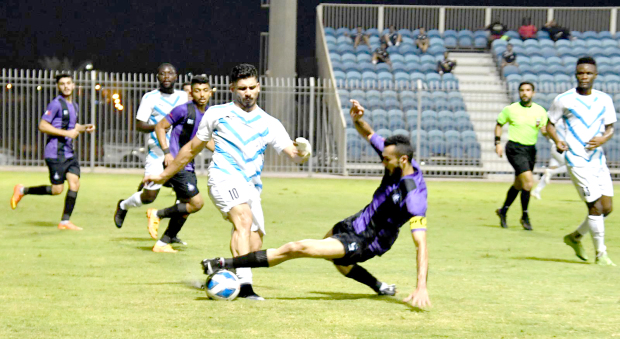 A'Ali and Ettihad players battle for the ball

Having waited 54 years for a chance to play on the Bahrain top-flight football circuit, A’Ali club wasted no time in getting their name on the points table last night after they defeated Al Ettihad 1-0 in their first-ever Second Division League game at the Riffa Club stadium.

Founded in 1968, A’Ali was finally accredited by the Bahrain Football Association (BFA) earlier this summer with the move granting the club the right to participate in the second-tier football competition which serves as a qualifying round for the country’s main tournament – the Nasser Bin Hamad Premier League.

“I am extremely happy that our team has won its debut game against a much more experienced side,” a delighted A’Ali club president, Hussain Al A’Ali told the GDN by phone from the Riffa stadium. “There were a large number of our supporters present to witness this historic occasion. Now that we have won our first-ever game, we will seek to positively build on this initial success.”

A’Ali coach Jasim Kamali, an experienced campaigner who has served as an assistant manager of the Bahrain national team as well as the manager of the Al Ahli and Ittefaq club teams over the past two decades, said a victorious debut augured well for the new team.

“We’ve only just entered the BFA’s fold,” he told the GDN. “Our team has had only two months to come together. So, winning our very first game means that we have gotten off to a perfect start. These are our first three points and they’re going to be followed by more. Our aim is to try and qualify for the Premier League.”

Despite the little time he and the club’s leadership had in putting a team together from the time the accreditation was announced in June till the beginning of the Second Division League earlier this month, Kamali said he was extremely satisfied with the squad he has managed to assemble.

“We knew the kind of players we were looking for,” the coach explained. “We sought professionals and we scouted for new talent as well. We have a good mix now, with five foreign players – a Syrian, a Brazilian and three from African countries – in the squad as well as some of the best local players that were available.”

Now that A’Ali had announced itself to Bahrain’s football world, the team would look to capitalise on its positive start and seek to prove to fans around the kingdom that they belonged in the list of the country’s top teams, Al A’Ali added.

“We are looking forward to proving to everyone that we belong here,” he declared. “It’s an honour for us to be part of Bahrain’s top-flight football fraternity. And all this has been made possible by the support of our patron, Tawfiq Al A’Ali. I wish to express my deepest gratitude, and give special thanks, to him.”