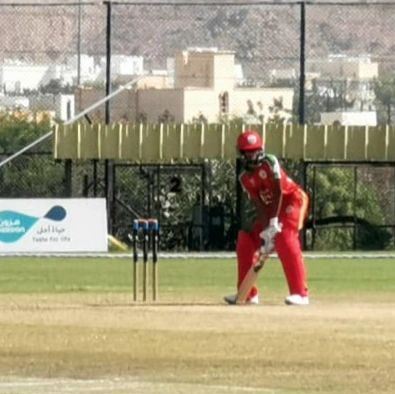 Bahrain’s run in the 2024 ICC U19 Men’s Cricket World Cup Asia Division 2 Qualifier ended on a dismal note yesterday as they lost by 187 runs to Oman in the third-place play-off at the Al Amerat Cricket Ground in Muscat, Oman.

Batting first after winning the toss, Oman rattled up 258 for four in their allotted 50 overs, thanks to an unbeaten 145-run partnership for the fourth wicket between Aryan Bisht, who scored 78 not out, and Sidh Mehta, who finished with 64 not out.

Chasing 259 to win, Bahrain slipped to 7 for three in the second over before captain, Aryan Ashwin, batting at number four, counter-attacked in a fourth-wicket partnership with Mohammad Adil Khan.

But the left-handed Ashwin’s 34-ball, 26-run innings was cut short by injury as he was forced to retire hurt with the score reading 40 for three.

Khan perished for 13 soon thereafter and his dismissal with the score at 47 for four was followed by a complete collapse as Bahrain lost their last five wickets for just 26 runs to be all out for 71 off 19.5 overs.

This was the third consecutive loss and sub-hundred total for Bahrain following their semi-final loss to Singapore yesterday, when they were bowled out for 62, and their 86-run loss to Oman in their last group match last Monday, when they collapsed to 92 all out, chasing a 179-run target.

Batting first, Hong Kong battled to a score of 201 for nine in their 50 overs.

In reply, Singapore, led by a 92-ball 102 by Vihaan Maheshwari, chased the target down in just 37.2 overs for the loss of five wickets.

Both finalists will now head to Kuwait in 2023 to play in the Asia Qualifier. According to tournament rules, the two finalists of the Division 2 Qualifier automatically become eligible for the next qualifying round for the U19 World Cup.

Kuwait, Malaysia, Nepal and the UAE have already qualified for the next stage.