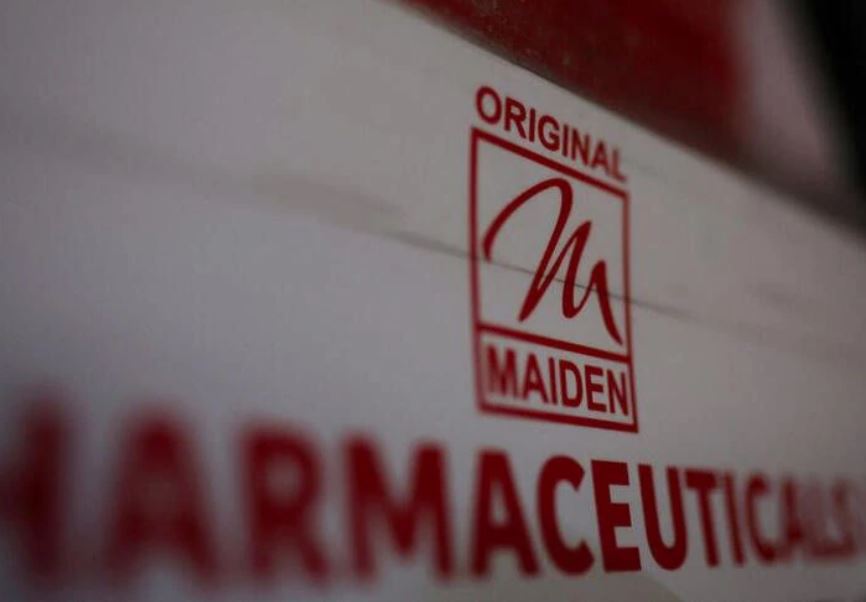 Logo of the Maiden Pharmaceuticals Ltd. company is seen on a board outside their office in New Delhi, India, October 6, 2022. (Image credit: Reuters)

Indian health authorities said on Wednesday they had halted all production of New Delhi-based Maiden Pharmaceuticals after a WHO report that its cough and cold syrups exported to Gambia may be linked to the deaths of dozens of children there.

Known as a "pharmacy of the world", India supplies 45pc of all generic medicines to Africa.

The deaths of 69 children in Gambia - one of the worst such incidents involving drugs from India - have come as a blow to the industry whose exports more than doubled in the last decade to hit $24.5 billion last fiscal year.

"In view of the seriousness of the contraventions observed during the investigation and its potential risk to the quality, safety and efficacy of the drug being produced, all the manufacturing activities of the firm is being stopped with immediate effect," said an order by federal and Haryana state drug regulators.

The drugs exported to Gambia were made by Maiden in a single batch in December last year at its main factory in Haryana's Sonipat district, about 40 kms (25 miles) north of New Delhi, with a use-by-date of November, 2024, the order said.

A top Indian health official, who declined to be named, said the government would not tolerate wrongdoing but that it was important to find out what exactly happened in Gambia. He denied allegations by some critics that health regulations in India, especially at the level of states, were lax.

The government has formed a committee of four experts that will advise further action after "examining and analysing adverse event reports, causal relationship and all related details shared by the WHO (World Health Organisation)".

But the source said the WHO had yet to share any report establishing a direct link to the deaths with the Indian-made medicines.

She said the WHO's conclusion about the deaths being linked to Maiden's medicines was based on analysis of several samples of medicines that were used by hospitalised children.

Maiden says on its website it has an annual production capacity of 2.2 million syrup bottles, 600 million capsules, 18 million injections, 300,000 ointment tubes and 1.2 billion tablets at its Haryana factories. It says it has two other factories in the state apart from the main one.

The WHO issued a medical product alert last week asking regulators to remove Maiden goods from the market.

Diethylene glycol and ethylene glycol are used as a cheaper alternative in some pharmaceutical products to glycerine, a solvent or thickening agent in many cough syrups.

Gambian police, in a preliminary investigation report on Tuesday, said that the deaths of 69 children from acute kidney injury was linked to the cough syrups made in India and imported via Atlanta-based Atlantic Pharmaceuticals.

The cough syrups had been approved for export only to Gambia, India says, although the WHO says they may have gone elsewhere through informal markets.

Indonesia said on Wednesday it would investigate cases of acute kidney injury which has caused the deaths of more than 20 children in its capital Jakarta this year, but that there was no connection with the cases in Gambia.