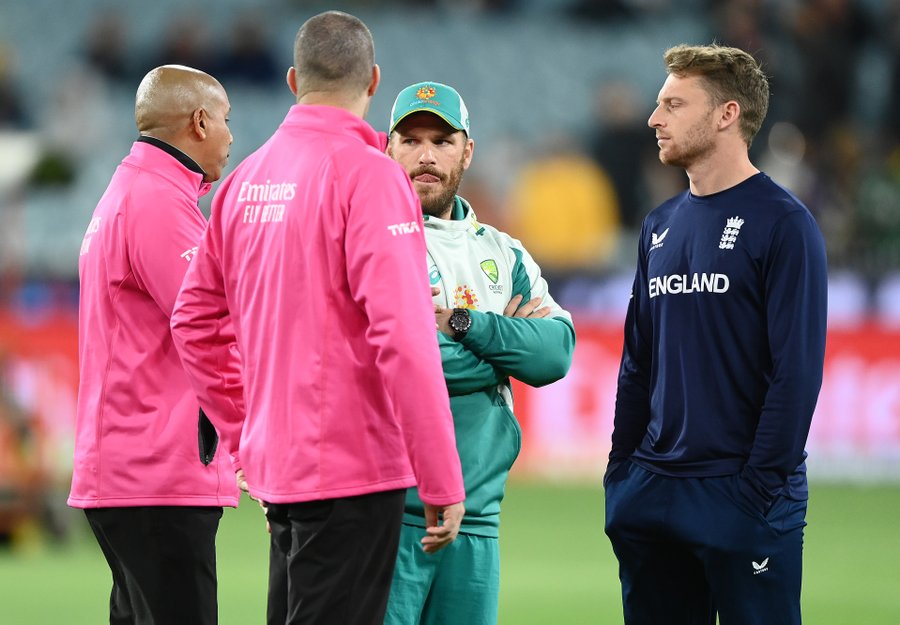 The T20 World Cup clash between champions Australia and England was abandoned without a ball bowled due to rain on Friday, leaving both teams' semi-finals hopes hanging in the balance and fans disappointed at the Melbourne Cricket Ground.

With the Ireland-Afghanistan match also washed out at the venue earlier on, England emerged from a miserable day at second in Group 1 among a logjam of four teams on three points.

New Zealand, with a game in hand, lead the group on run-rate ahead of third-placed Ireland and fourth-placed Australia, but the Black Caps can take back top spot with victory over Sri Lanka in Sydney on Saturday.

With the top two sides advancing to the semis, none of England, Australia or Ireland can afford to lose another match in a tournament in which four out of 14 Super 12 games to date have been lost to rain and others disrupted.

"The outfield has taken a drenching over the last couple of weeks, as wet as I've ever seen it," said Australia captain Aaron Finch, a Melbourne local.

"Disappointing not to get on but just the amount of rain over the last couple of weeks has been amazing."

England captain Jos Buttler said the surface was unfit to play on and the right call had been made.

"Every bowler who would have bowled if you’d have played, you would have had concerns," he told reporters.

England face a crunch match against New Zealand in Brisbane on Tuesday, a repeat of the 50-over World Cup final in 2019.

England won the dramatic 2019 final at Lord's on a technicality after the match was tied and the teams could not be split after a Super Over.

"It will do well to live up to that one," said Buttler.

"Every game is pretty much a must-win."

It was a cruel day for bottom-placed Afghanistan, who already had a Super 12 match against New Zealand washed out at the MCG on Wednesday.

It was not lost on their coach Jonathan Trott that the roofed Docklands stadium across town might have been considered as an alternative to the MCG as it often hosts T20 games in the domestic Big Bash League.

"So we could have had lots of cricket," said the former England batsman.

"But this is the way it is. It's what makes tournaments unpredictable." (Reporting by Ian Ransom in Melbourne; Editing by Alex Richardson and Pritha Sarkar)