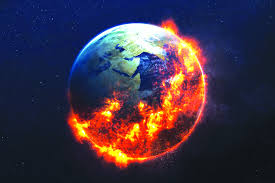 As we watch world leaders debate action taken to stem climate change at COP27, there is clearly one link missing – the voice of 16 per cent of the world.

Yes, despite the fact that there are 1.3 billion adolescents in the world today, more than ever before, they are the unseen victims of climate change.

In election after election around the world, climate change, or more broadly, the environment, has failed to become a decisive factor. At the same time, UN Secretary-General António Guterres, warns us that the climate change crisis has become a ‘code red for humanity’.

When discussing the dire straits that the world environment is in, we have a facile response: we wag our heads knowingly and mutter ‘climate change!’ for everything from a particularly hot or cold day to our washing taking longer than usual to dry.

And, I’m ashamed that even before the memory of my teen rebellion and idealism faded, my generation and I have been quick to pick on millennials and even school children with not even the cover of imagination – the same old complaints of too much of all the good things (it used to be TV for us, now its video games) and poor attitude.

The fact is, our children have learnt from our mistakes and are actually much more invested in the environment and in their own lives. That means they show it in their everyday actions – less plastic use that us, less water wastage and more questioning of stuff that we took wastefully for granted. And, difficult as it is to believe, they actually have better understanding of inter-personal skills than us and are more tolerant of the world’s differences, celebrating diversity with a seamless ease until we, the older gen, step in and muddy their understanding.

Except on a very granular level – within families, say – youth really don’t have much say in how the world is run. That’s a pity because it’s today’s young people who stand at the decisive cusp of change management of the environment. They are the first generation to feel the impacts of climate change and who will be the last generation to be able to mitigate its worst effects. And, climate change is already having a disproportionate effect on people living in lower-income countries, where the majority of the world’s young people live.

Worse, not only do they see through us when we say and do things that we don’t mean, they learn to dissimulate themselves and gradually lose the enthusiasm to make change happen.

Despite the fact that youth-led action on climate change has a track record of success, politicians seem to have rigged the system to ignore young people’s voices. Africa, the continent most impacted by the environmental crisis sees the COP27 taking place at its doorstep and it is to be hoped its ideas and concerns will also figure in the discussions.

It is time we stopped talking glibly about net zero emissions and PR exercises like beach clean-ups and actively walked the talk every day.

Remember, small actions speak the loudest when multiplied a million times over – and each one of us is one in a million!