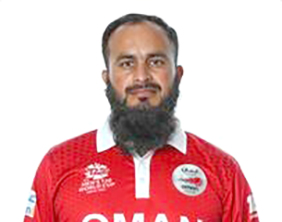 OMAN captain Zeeshan Maqsood hammered a 44-ball century and leg-spinner Samay Shrivastava snapped up a career-best 5 for 18 as the hosts beat Bahrain by 106 runs last night in a crucial match of the Desert Cup T20I Series 2022 at the Al Amerat Cricket Ground in Muscat.

Chasing an improbable 221 for victory in their 20 overs, Bahrain lost their last seven wickets for just 18 runs off 26 balls, with Shrivastava taking three wickets in four balls at one point, to collapse to 114 all out in the 16th over, having been 96 for three in the 12th over at one stage.

All-rounder David Mathias, opening the batting for the second game in a row, top-scored with 39 off 32 balls.

Earlier, Maqsood, who finished with 102 not out, scored one of the fastest centuries in T20I history, bringing up his ton with his ninth six off the last ball of the innings as Oman plundered 81 runs off the last five overs.

Maqsood, who also hit seven fours in his blistering knock, smashed eight sixes in the last three overs alone, during which Oman rattled up 57 runs.

The massive defeat ended a sequence of three consecutive wins in the tournament for Bahrain and enabled Oman to draw level on six points each in the table.

To qualify for tomorrow’s final, Bahrain will now need to beat Saudi Arabia, who have not won a single match thus far, in their last game tonight and hope that Canada prevail over Oman in the encounter that will take place in the afternoon.

Canada, who vanquished Saudi Arabia by 45 runs earlier in the day, lead the table with eight points from their five games. Should they lose to Oman, and if Bahrain win against Saudi Arabia, all three teams will end up with eight points each and net run-rate will then determine which two go on to play the final.