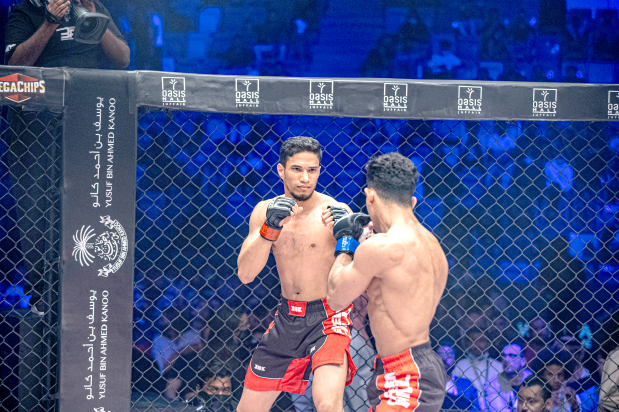 Speaking ahead of BRAVE CF 66 set to take place in Bali, Indonesia this Saturday, Shahid doffed his hat to ‘Sher-e-Hind’ for how he has grown over the years while also doing his part in lifted MMA in his motherland.

Mixed Martial Arts has gained significant popularity in India over the years, with an increasing number of events being held in the country. And Shahid has praised the influence of Farhad, who returns to action at BRAVE CF 66 against Ruel Panales.

“Mohammed Farhad is the biggest star in Indian MMA. He has seen it all. He was there when I was still fighting,” says Shahid who retired with a professional record of four wins and two losses. “Farhad is now an international fighter with a lot of experience. At BRAVE Combat Federation, we are proud to have followed him on his journey from a young athlete to a family man. Now, he is an Indian MMA icon and one of the top bantamweights in the world,” said the BRAVE CF president.

‘Sher-e-Hind’ never ceases to entertain with eleven of his twelve wins coming via KO/TKO stoppages. At BRAVE CF 66, the Indian star – who has an impressive record of 12 wins and four losses – Farhad faces Filipino star Ruel Panales in a bantamweight bout.

He aims to get his BRAVE CF 135-pound title campaign back on track after a disappointing loss against Egypt’s Maysara Mohamed at BRAVE CF 57. Before that, he was riding a three-fight win streak that included two stoppages in the most-global MMA promotion, BRAVE CF.

A win over Panales could help Farhad take the next step in his career and get him closer to that elusive BRAVE CF bantamweight strap. It will not be an easy feat, though. Panales - mentored by former BRAVE CF veteran Rolando Dy - makes his BRAVE CF debut and will aim to become the new face of Filipino MMA with an emphatic win over his dangerous Indian opponent.

Much is being made about Panales as he comes into BRAVE CF unbeaten with a five-fight win streak. With Dy being his mentor, it only adds to the allure of Panales. Farhad will be keen on derailing the Panales hype train and flying the Indian flag high in BRAVE Combat Federation again.

BRAVE CF 66 takes place Saturday as the world’s fastest-growing MMA organisation returns to Indonesia after a four-year hiatus. The fight card is head-lined by a middleweight bout between South Africa’s Chad Hanekom and South Korea’s In Jae La. For more information, visit www.bravecf.com.